Group of scientists to identify disabled victims killed by Nazis 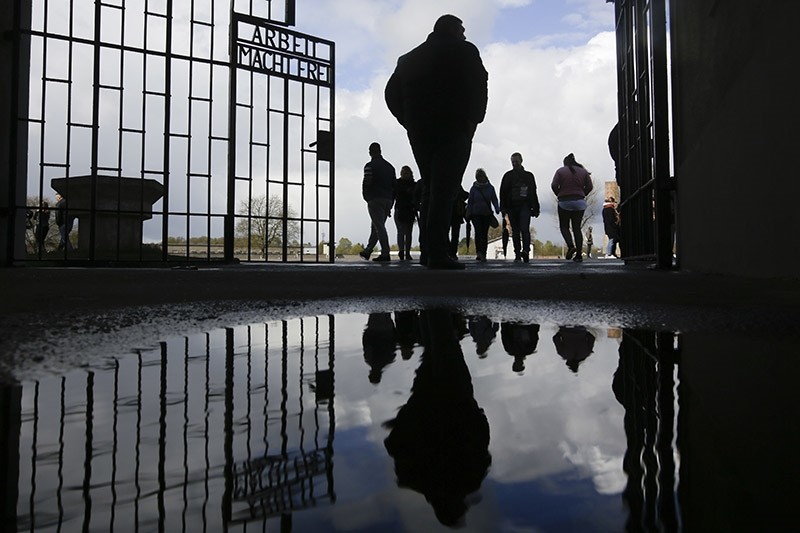 People enter the Sachsenhausen Nazi death camp through the gate with the inscription 'Arbeit macht frei' (work sets you free) in Oranienburg, about 35 kilometer north of Berlin Sunday, April 23, 2017. (AP Photo)
by May 03, 2017 12:00 am

A German network of leading science institutes will begin identifying thousands of brain specimens belonging to people killed by the Nazis because they suffered from a disability or were ill.

The three-year-long research project into the specimens in the Max Planck institutes' possession will begin in June, and aims to build a database listing the names of all "euthanasia" victims.

"It will include basic biographical data on the victims, their institutional treatment, and the criteria used to select the victims," the Munich-based, non-profit Max Planck Society said in a statement.

"The manner of their death will also be documented along with data on the removal of the brain... and the research carried out on (it)."

Adolf Hitler's so-called "euthanasia" programme, in which doctors and scientists actively participated, sought to exterminate the sick, the physically and mentally disabled, those with learning disabilities and those considered social "misfits".

Between January 1940 and August 1941, doctors systematically gassed more than 70,000 people at six sites in German-controlled territory, until public outrage forced them to end the overt killing.

But tens of thousands more died across Europe until the Nazis were defeated in 1945, through starvation, neglect or deliberate overdoses administered by caregivers.

Many also underwent bizarre medical experiments and forced sterilisations because of their supposed genetic inferiority.

After the war, Max Planck had sought to inter all human remains belonging to victims of the Nazis in its possession.

But it later emerged that institutes within the grouping dealt with the issue in different ways.

While the institute for brain research decided to part with all specimens dating from between 1933 and 1945, the institute of psychiatry only removed items "which were unambiguously documented as victim-derived or whose origins were uncertain -- around 30 percent of the overall inventory".

In 2014, a new employee at the archives in Berlin stumbled across a shoebox-sized wooden box containing slides with brain sections.

The psychiatry institute then commissioned an external specialist to draw up a rough inventory outlining the historical documents and brain sections in its storage facilities.

Completed in February 2017, the inventory lists 24,500 specimens from the 1920s through to the 1980s and serves as preparation for the identification project.

Underlining the Herculean task ahead, the project's researchers acknowledged that "it will not be possible in the course of this project to undertake a more extensive reconstruction of every victim's biography in view of the large numbers of victims -- of whom there may potentially be several thousand".

"It would appear realistic at best to recreate the life stories of just a few by way of example," they added.