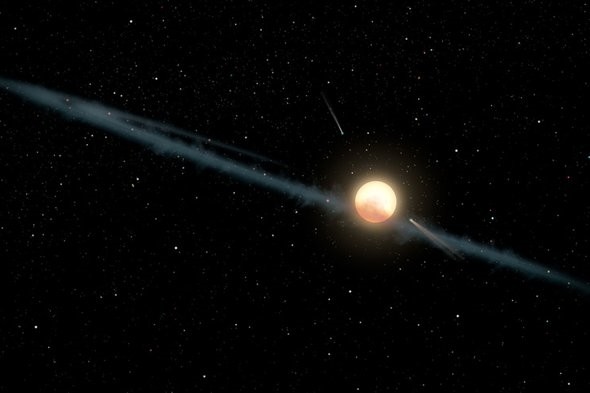 The enigma of KIC 8462852, the Milky Way's most mysterious star that spurred 'alien megastructure' and other exotic theories due to its random but significant fading, might have actually been solved.

According to a new study published in The Astrophysical Journal on Tuesday, the star's unusual dimming that has baffled scientists for years is more likely caused by dust, not a "megastructure" built by an advanced civilization, a.k.a aliens.

Researchers found that there was less dimming in the infrared light from KIC 8462852 – more commonly known as Tabby's Star - than in its ultraviolet light, and hence any object larger than a dust grain passing in front of the star would cause uniform dimming across all wavelengths of the light it emits.

"This pretty much rules out the alien megastructure theory, as that could not explain the wavelength-dependent dimming," said Huan Meng, the lead author of the study.

"We suspect, instead, there is a cloud of dust orbiting the star with a roughly 700-day orbital period," he said.

The study, which used NASA's Spitzer and Swift missions and the Belgian AstroLAB IRIS observatory to observe Tabby's Star from January 2016 to December 2016, suggests that uneven circumstellar dust is the actual cause of long-term dips in the star's brightness.

However, the study fails to address the reason for the star's short-term 20 percent brightness dips. So, scientists still have to solve this mystery.

KIC 8462852 is a star that lays 1,480 light-years away in the constellation of Cygnus in the outer edges of the galaxy. It was first spotted by the Kepler Space Telescope in 2009. The star's intermittent but pronounced and inexplicable dips in its brightness however, were discovered in 2011 by a group of volunteers, prompting the science world to bring an explanation to these strange dips that made the star look like a flickering light bulb.

In 2015, the star was also named Boyajian's star after Tabetha Boyajian, an astronomer at the Louisiana State University, who led a team that observed a dramatic 22 percent dip in the star's light.