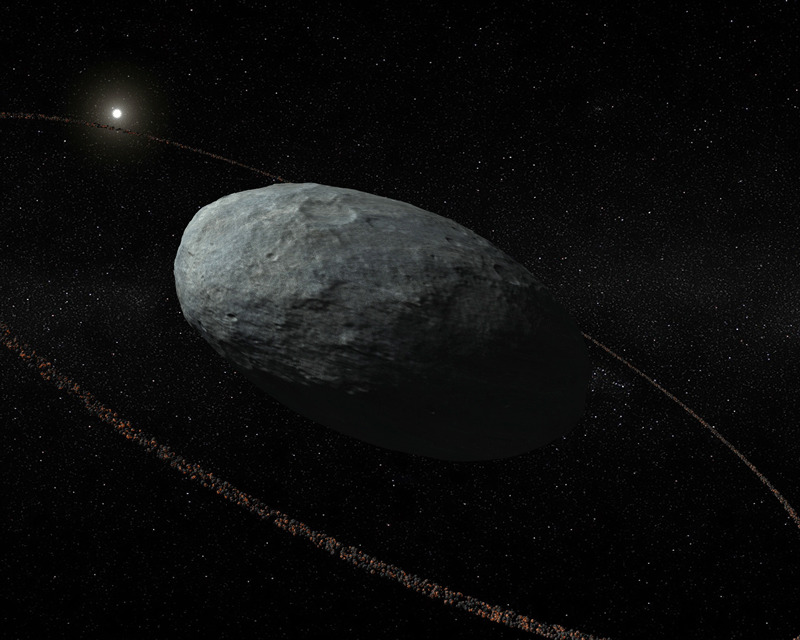 Scientists from Turkey cooperating with an international research team of scientists discovered a ring consisting of frozen gas and dust around a minor planet named Haumea, which is located outside the solar system.

Ünsalan highlighted that the telescopes from five Turkish observatories in Çanakkale, Antalya, Erzurum, Adıyaman and Samsun were used during the research.

According to statement released Friday, the discovery was published in the international, interdisciplinary journal of science Nature on Oct. 12, 2017.

"That is a big honor for our country," Ünsalan said.

Scientists are not entirely sure what causes rings to form around planets, and they say it may be different for different bodies.

The discovery of a ring around dwarf planet Haumea, which was named after the Hawaiian goddess of childbirth, could also lead to more ring discoveries, either in our solar system or exoplanet systems, researchers said.

Haumea is 7.5 billion kilometers away from Earth, and because of its relatively small body the planet is difficult to see even with the most sophisticated of telescopes.

In 2008, it was recognized by the International Astronomical Union as one of the five dwarf planets: Ceres, Eris, Makemake and Pluto

Currently located 2.6 billion kilometers beyond Pluto, Haumea is a dwarf planet located beyond Neptune's orbit and takes 285.5 years to orbit the Sun. Its orbit is elliptical, and it rotates on its axis every 3.9 hours, the fastest rotation rate of any Solar System object longer than 100 kilometers. Scientists speculate that its rapid rotation may have flattened the dwarf planet into its current oval shape.