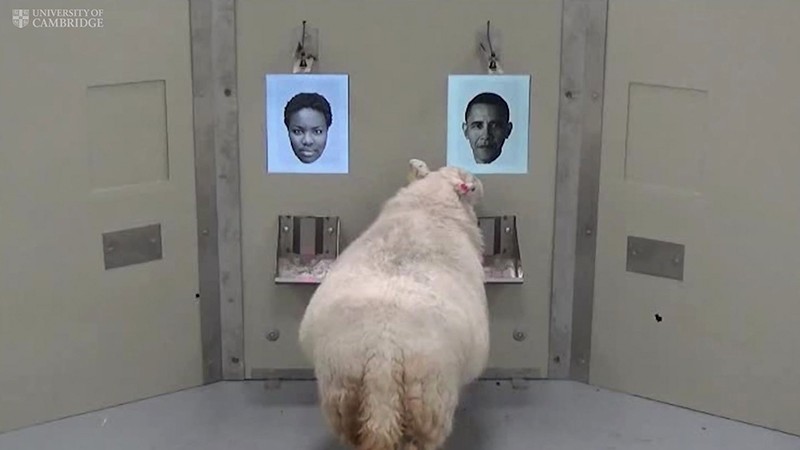 In this image taken from video, a sheep indicates recognition of former US president Barack Obama, right, displayed on a computer screen during research carried out by scientists at Cambridge Uni. with their results published Nov. 8, 2017 (AP Photo)
by Compiled from Wire Services Nov 08, 2017 12:00 am

A new study shows that sheep have the ability to recognize human faces from photographs on computer screens.

The Cambridge University study published Wednesday also shows that sheep can recognize the faces of their human handlers without any prior training.

In a specially equipped pen, sheep were shown pictures of people on two computer screens, on one side would be an unknown person and on the other would be one of four celebrities.

The animal would receive a reward of food for choosing the photograph of the celebrity by breaking an infrared beam near the screen displaying it. If they chose the wrong photograph, a buzzer would sound and they would receive no reward.

The sheep eventually managed to identify the familiar face eight times out of every 10.

It had been known that sheep can recognize familiar faces of other sheep and of humans.

In addition to being shown images of the celebrities facing forward, scientists also tested the animals' ability to recognize the faces in photographs taken from other angles.

The animals' success rate fell by around 15 percent when presented with the faces at a new angle, an amount researchers said was comparable to that seen when humans perform the task.

Among the faces they were trained to recognize were Barack Obama and Harry Potter actress Emma Watson.

The research was published in Royal Society: Open Science.

The researchers say this study of the ability of sheep to recognize faces may be useful in research into Huntington's disease and other human brain disorders that affect mental processing.