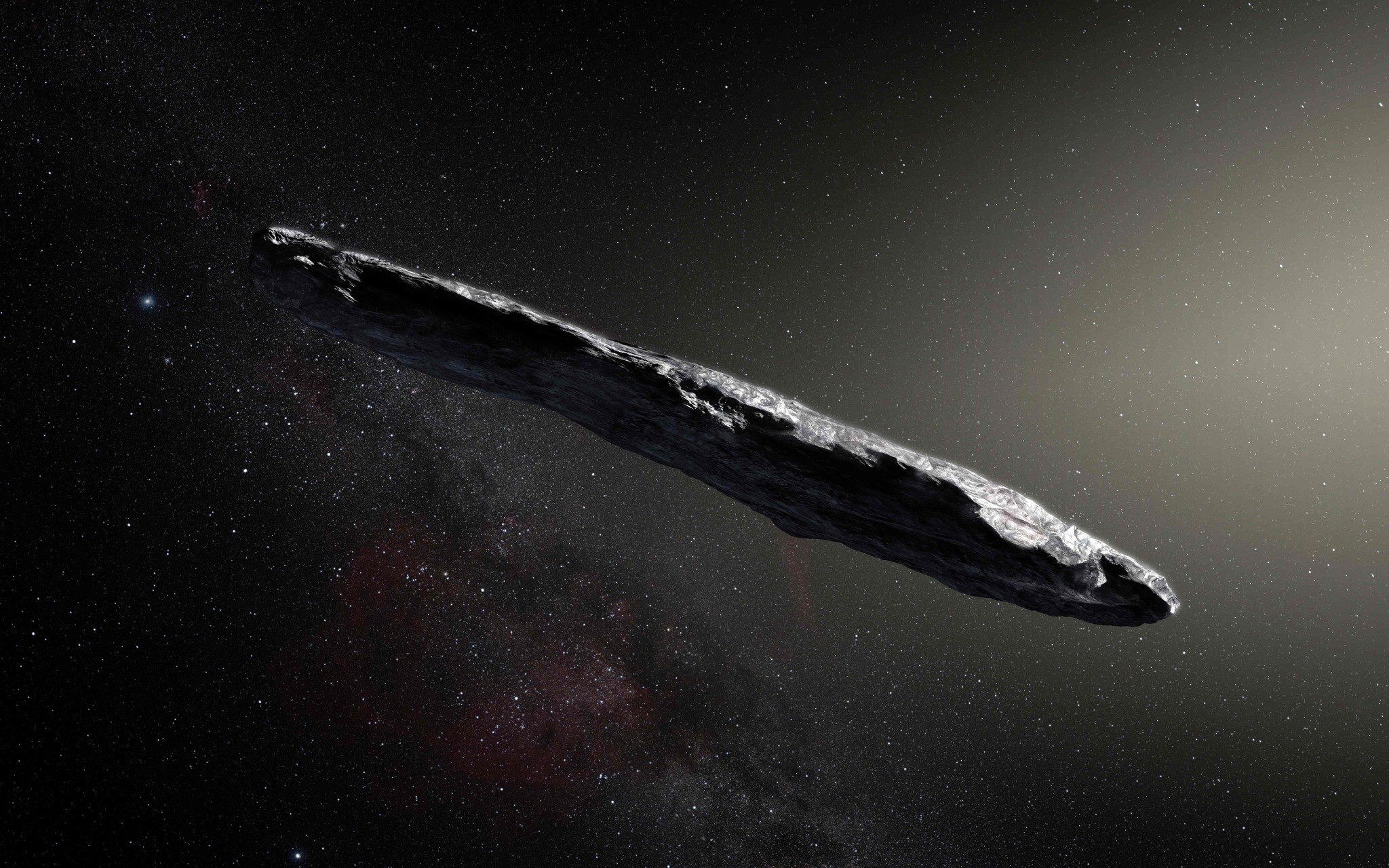 This handout photo released by the European Southern Observatory on November 20, 2017 shows an artist's impression of the first interstellar asteroid: Oumuamua. (AFP Photo)
by German Press Agency - DPA Nov 21, 2017 12:00 am

It's 400 meters long, shaped like a giant cigar and there's nothing quite like it in our solar system.

For the first time, astronomers have spotted an "interstellar visitor," as it was described in a statement by NASA released on Tuesday.

Taken off guard by the unexpected sighting, experts have wondered at the rocky object's unusual shape: it is around 10 times as long as it is wide, setting it apart from the asteroids that orbit our Sun.

The reddish-coloured, elongated meteorite traveled for millions of years from another solar system before it was discovered by scientists at the University of Hawaii in Honolulu.

"This thing is very strange," Karen Meech of the university's Institute for Astronomy, who led the team, said in a statement.

Describing the rock's shape, Lance Benner, a specialist in radar imaging of asteroids at the Jet Propulsion Laboratory in California, said it was "truly extraordinary - we have never seen anything in the solar system that is this elongated."

The discovery was made on October 19 from the Pan-STARRS 1 observatory in Hawaii, jointly funded by the institute and NASA, and outlined by the university team in the journal "Nature" on Tuesday.

The International Astronomical Union created a new designation of "I" - or interstellar - especially for the discovery. The rock had originally been labeled with an "A," denoting an asteroid.

Along with its technical title of 1I/2017 U1, the cosmic rock has been given the Hawaiian name of 'Oumuamua, which the university statement says "reflects the way this object is like a scout or messenger sent from the distant past to reach out to us." Roughly translated, it means "reach out for first, in advance."

"'Oumuamua is rapidly fading as it heads out of the Solar System and recedes from both the Sun and the Earth, so getting new observations as fast as possible was crucial," Meech explained.

The astronomers collated data from telescopes worldwide to chart the shape and movement of the object.

"We had to act quickly," said team member Olivier Hainaut, from the European Southern Observatory in Garching, Germany. "'Oumuamua had already passed its closest point to the Sun and was heading back into interstellar space."

In a statement from the university institute, he was quoted as likening the experience to "the beginning of the famous science fiction story, 'Rendezvous with Rama.'" In that futuristic novel by Arthur C Clarke, explorers are sent to intercept an alien spaceship that enters our solar system.

"This history-making discovery is opening a new window to study formation of solar systems beyond our own," said Thomas Zurbuchen of NASA's Science Mission Directorate in Washington.