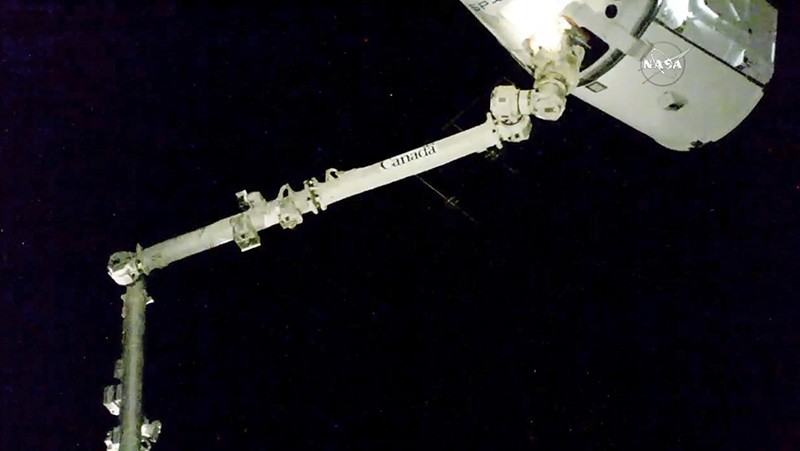 In this image taken from NASA Television, the robotic arm reaches out and captures the SpaceX Dragon cargo spacecraft for docking to the International Space Station, Sunday Dec. 17, 2017. (NASA via AP)
by Compiled from Wire Services Dec 18, 2017 12:00 am

"Dragon installed," a NASA commentator said at 1326 GMT after the delicate, hourslong process of sealing 16 bolts joining the two craft was complete.

At that moment, they were flying 250 miles (402 kilometers) above the North Atlantic.

Earlier, as the Dragon arrived, the space station's robotic arm, operated by one of its astronauts, attached itself to the cargo ship as they were over Australia and Papua New Guinea.

"It's a great day to see Dragon back at ISS again," Mission Control radioed.

Replied spaceman Joe Acaba, "It's a beautiful spacecraft, and we're looking forward to digging into it and getting some science on board."

The recycled spaceship blasted off Friday carrying 4,800 pounds (2,200 kilograms) of food, supplies and experiments -- including a study on thyroid cancer, lab mice and barley seeds, the latter a Budweiser experiment. The beer maker — eager to serve the first brews on Mars — wants to see how well the 20 barley seeds sprout in weightlessness.

It was the first time SpaceX launched both a rocket and a cargo ship that have flown before.

Three minutes after launch the booster and second stage of the rocket separated.

The second stage continued to propel the Dragon toward the International Space Station, while the rocket booster landed upright on solid ground at Cape Canaveral, Florida.

It was the 14th recovery of a booster for SpaceX this year.

The Dragon cargo ship previously flew to the ISS in 2015.

NASA is SpaceX's most important customer, and this mission is SpaceX's 13th of 20 under a $1.6 billion contract with NASA.

The docking came as a three-man space crew featuring American and Japanese rookie astronauts as well as an experienced Russian cosmonaut blasted off from Kazakhstan on Sunday for a six-month mission at the International Space Station.