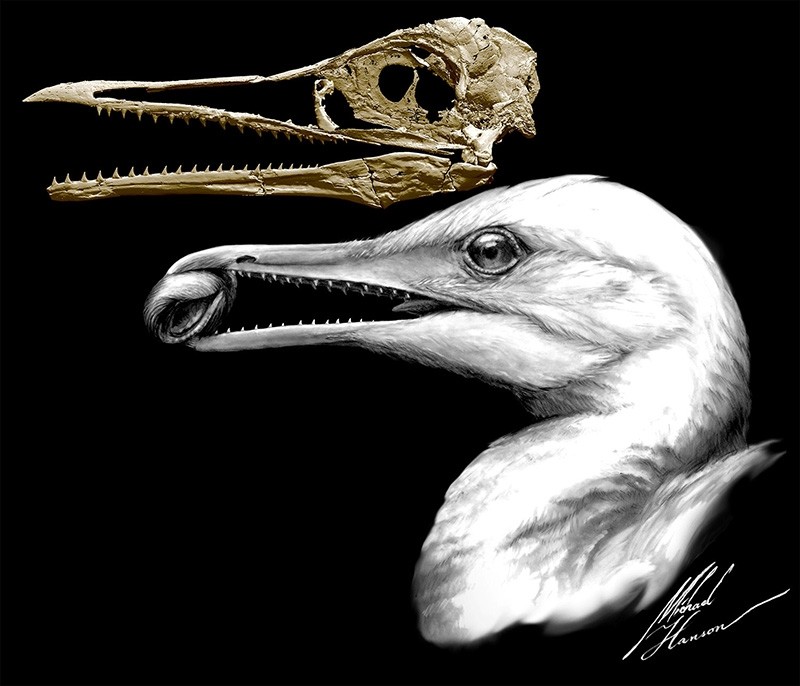 CT-scan-based skull restoration and life reconstruction of the toothed stem bird Ichthyornis dispar, a primitive seabird that prospered about 85 million years ago along the warm, shallow inland sea that once split North America. (Reuters Photo)
by May 02, 2018 12:00 am

A gull lookalike with teeth: scientists refined their description Wednesday of a fascinating fowl at the evolutionary junction between dinosaur and modern bird -- with skull features of both.

Newly-discovered fossils show the extinct Icthyornis dispar, or "fish bird," had a mouth filled with sharp, curved teeth like those of a dinosaur, a team wrote in the scientific journal Nature.

But the tip had been transformed into a sharp, toothless, "pincer-like" instrument -- the original bird beak.

This was likely used for preening and handling objects after reptile arms turned into wings.

"Holding and perforation of prey probably fell to the sizeable, reptilian tooth row retained," in this dino-bird, the researchers added.

Birds survived when the large lizards were wiped out some 65 million years ago at the end of the Cretaceous period during which I. dispar also lived.

The fish bird, thought to have been a surface-skimming or shallow-plunging feeder, had a larger-than-lizard brain similar to that of today's birds, said the researchers.

But some skull parts remained dinosaurian.

The newly-modelled skull, reconstructed from the fossil remains of several fish birds, lifted the veil on "what the bird beak looked like as it first appeared in nature," said study co-author Bhart-Anjan Bhullar, a Yale University palaeontologist.

"The first beak was a horn-covered pincer tip at the end of the jaw," he explained in a university press statement.

"The remainder of the jaw was filled with teeth. At its origin, the beak was a precision grasping mechanism that served as a surrogate hand."

The fish bird's so-called "transitional" beak was attached to a skull with an enlarged cavity for its evolving, more modern brain, the said.

But bones in the cheek region more dinosaur-like, with large chambers for stronger jaw-snapping muscles.

This indicated that in bird evolution, "the brain transformed first while the remainder of the skull remained more primitive and dinosaur-like," the researchers said.

I. dispar would have resembled a modern-day seabird -- a gull or tern. With its mouth closed, the teeth would likely not have been visible.

Scientists first discovered Ichthyornis in the 1870s, but the first fossilized specimens were crushed and incomplete.

At the time, restoration and mounting of the fossils "were, shall we say, somewhat overenthusiastic," palaeontologist Kevin Padian of the University of California, Berkeley, wrote in a comment on the study.

Now remounted, previously overlooked elements from the early specimens have emerged. These, together with details from four newly-discovered and well-preserved fossils -- three uncovered in museum collections -- permitted the new 3-D reconstruction.

Based on early fossil finds, Ichthyornis was described with other "extinct toothed birds" in an 1880 publication by American palaeontologist Othniel Marsh.

Later that year, Charles Darwin thanked him for work that uncovered "the best support to the theory of evolution."