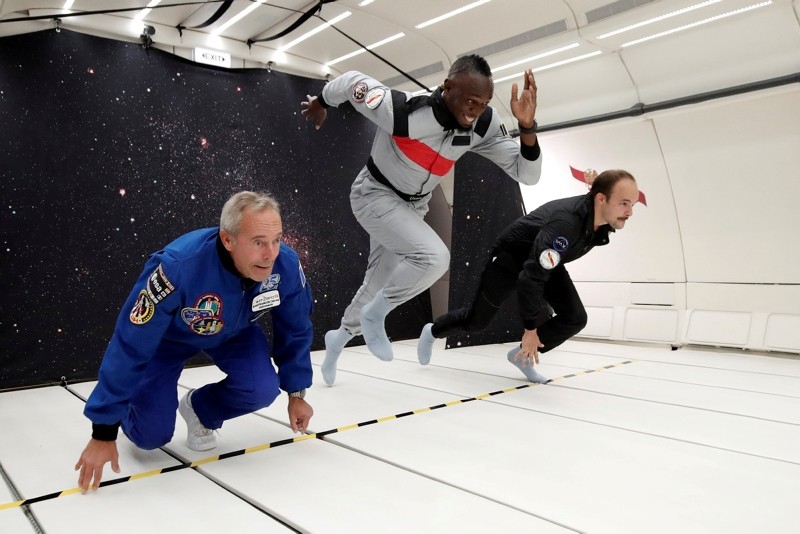 Usain Bolt sprinted through thin air and sipped champagne floating on his back as he enjoyed near zero-gravity conditions in an aircraft performing stomach-lurching parabola dives.

The eight-times Olympic champion grinned as he experienced weightlessness in the modified plane normally used for scientific research, but on this occasion to showcase a champagne bottle that will allow astronauts to drink bubbles in space.

Taking a break from his efforts to become a professional soccer player, Bolt said he felt like a "kid in a candy store" after spending about four minutes floating and joking around in near-weightless conditions.

Aboard the Airbus A310 plane, the 32-year-old Jamaican caught a free-floating globule of champagne in his mouth and ran in low-gravity conditions.

"I was nervous but as soon as the first one (parabola) goes you kind of go 'oh my God, what's happening'. But after the third one I was like 'yeah, it's crazy'," Bolt told Reuters TV.

He then challenged his fellow passengers, French astronaut Jean-Francois Clervoy and CEO of Novespace and French Interior designer Octave de Gaulle, to a zero-gravity race. Unsurprisingly, the fastest man on Earth won, and celebrated with a sip of space champagne.

The bottle was designed by champagne-maker Mumm. In time the company hopes to capitalize on the advent of space tourism.

Billionaires Jeff Bezos, founder of Amazon Inc, and Richard Branson are locked in a race to send wealthy tourists into suborbital space, high enough to see the curvature of the earth. Tesla chief executive Elon Musk has ambitions to send paying passengers around the moon.

They may want to toast their adventures.

"The tourists will be enjoying the view of the earth, the view of space, weightlessness, and they will celebrate. So maybe there is not a market for a lot of bottles in space, but there is a market for some bottles," said Jean-Francois Clervoy, a French former astronaut who accompanied Bolt on his flight.