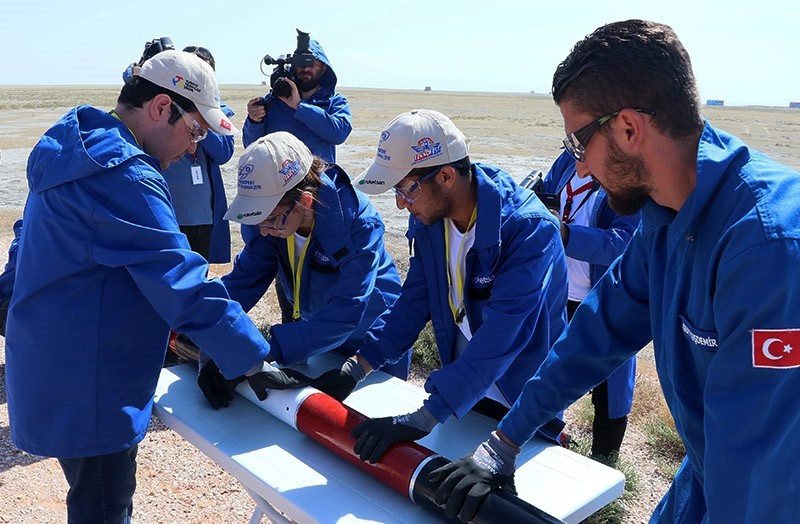 Students from high schools and universities exhibited their skills in a rocket race, the second of its kind in the world according to organizers, in central Turkey’s flatlands, as part of an upcoming aerospace event that seeks to promote the national defense industry and locally made technologies

Youngsters in 28 teams out of some 160 applications took part in the competition with their own unique rocket designs to successfully carry four kilograms of payload to an altitude of 3,000 meters and descend on the ground with a parachute.

Industry and Technology Minister Mustafa Varank also attended the competition, which was held in rocket testing grounds located in the vast flatlands near Lake Tuz in Turkey's central Aksaray province.

The competition, second of its kind after a similar competition in the U.S., was held in two categories of low and high altitudes.

The results of the rocket race will be announced at the "Teknofest Istanbul" to be held on Sept. 20-23 at the city's new airport. President Recep Tayyip Erdoğan will present the award for the winning team, which will also be provided with employment opportunities in Roketsan.

"We hope that with this kind of competition we will inure our young generation to both aviation industry and technology," Varank said, inviting all citizens to attend the event in Istanbul.

Teknofest Istanbul is being organized by the Turkey Technology Team Foundation (T3) and the Istanbul Metropolitan Municipality to promote and to showcase Turkey's rapid advance in technology. More than 20 partners including government bodies, private companies and academic institutes support the event.

Selçuk Bayraktar, the chairman of the T3 Foundation's board of trustees and technical manager of domestic unmanned aerial vehicle producer Baykar, said the call for this year's competition was made nationwide, but next year they will make an international call.

"There is the Pars Team from Istanbul Technical University (ITU) that has taken part in international competitions various times. They said that there is interest in the competition in Turkey. Next year, we expect more than 300 applications. We can tell the whole world from here, Lake Tuz, that all rocket teams from throughout the world are invited to the rocket competition that will be held next year in the sponsorship of Roketsan," Bayraktar said.

Within the scope of Teknofest Istanbul, aviation demonstrations, including parachutists, SoloTürk, Turkish Stars and international professional aviation teams, seminars, award-winning technology competitions and domestic technology enterprises, as well as an International Venture Summit that will include international enterprises, will be organized.

The most important part of the festival will be the technology competitions organized in 12 different categories. By providing competition teams with technical equipment support to design and develop their own projects during the preparation process, its aim is to support the youth's technological developments. The competition accepts applications from a wide range of age groups, from secondary school students to post graduates. More than 20 partners including government bodies, private companies and academic institutes will support the event.