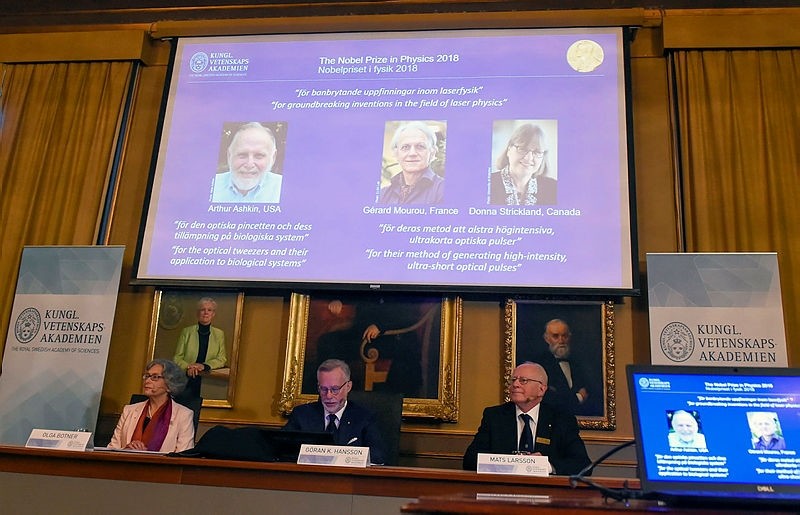 Three scientists on Tuesday won the Nobel Physics Prize for inventing optical lasers that have paved the way for advanced precision instruments used in corrective eye surgery and in industry, the jury said.

Arthur Ashkin of the United States won one half of the nine million Swedish kronor (about $1.01 million) prize, while Gerard Mourou of France and Donna Strickland of Canada shared the other half.

BREAKING NEWS⁰The Royal Swedish Academy of Sciences has decided to award the #NobelPrize in Physics 2018 "for groundbreaking inventions in the field of laser physics" with one half to Arthur Ashkin and the other half jointly to Gérard Mourou and Donna Strickland. pic.twitter.com/PK08SnUslK

Ashkin, 96, was honored for his invention of "optical tweezers" that grab particles, atoms, viruses and other living cells with their laser beam fingers.

With this he was able to use the radiation pressure of light to move physical objects, "an old dream of science fiction," the Royal Swedish Academy of Sciences said.

A major breakthrough came in 1987 when Ashkin used the tweezers to capture living bacteria without harming them, the Academy noted.

Ashkin, who made his discovery while working at AT&T Bell Laboratories from 1952 to 1991, is the oldest winner of a Nobel prize, beating out American Leonid Hurwicz who was 90 when he won the 2007 Economics Prize.

Meanwhile Mourou, 74, and Strickland -- only the third woman to win the Physics Prize -- won for helping develop a method to generate ultra-short optical pulses, "the shortest and most intense laser pulses ever created by mankind," the jury said.

Their technique is now used in corrective eye surgery.

Speaking by phone to the academy, a moved Strickland said she was thrilled to receive the Nobel prize that has been the least accessible for women.

"We need to celebrate women physicists because they're out there... I'm honored to be one of those women."

Before her, only Marie Curie and Maria Goeppert Mayer had won the physics prize, in 1903 and 1963 respectively.

The Royal Swedish Academy of Sciences has in the past lamented the small number of women laureates in the science fields in general.

It has insisted that it is not due to male chauvinism bias on the award committees, instead attributing it to the fact that laboratory doors were closed to women for so long.

"It's a small percentage for sure, that's why we are taking measures to encourage more nominations because we don't want to miss anyone," the head of the Academy, Goran Hansson, said on Tuesday.

Last year, U.S. astrophysicists Barry Barish, Kip Thorne and Rainer Weiss won the physics prize for the discovery of gravitational waves, predicted by Albert Einstein a century ago as part of his theory of general relativity.

On Monday, two immunologists, James Allison of the U.S. and Tasuku Honjo of Japan, won this year's Nobel Medicine Prize for research into how the body's natural defenses can fight cancer.

The winners of the chemistry prize will be announced on Wednesday, followed by the peace prize on Friday. The economics prize will wrap up the Nobel season on Monday, Oct. 8.

For the first time since 1949, the Swedish Academy has postponed the announcement of the 2018 Nobel Literature Prize until next year, amid a #MeToo scandal and bitter internal dispute that has prevented it from functioning properly.