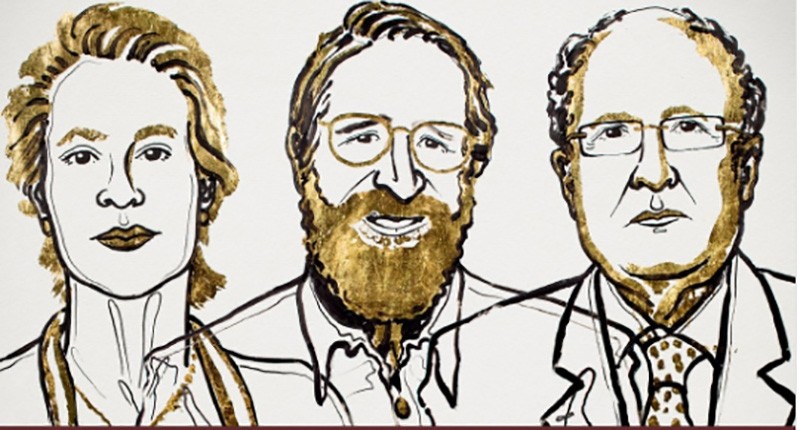 U.S. scientist Frances H. Arnold, fellow American George P. Smith and British scientist Sir Gregory P. Winter were awarded on Wednesday with the 2018 Nobel Chemistry Prize for "the directed evolution of enzymes" and for "the phage display of peptides and antibodies."

BREAKING NEWS:
The Royal Swedish Academy of Sciences has decided to award the #NobelPrize in Chemistry 2018 with one half to Frances H. Arnold and the other half jointly to George P. Smith and Sir Gregory P. Winter. pic.twitter.com/lLGivVLttB

"This year's Nobel Laureates in Chemistry have been inspired by the power of evolution and used the same principles – genetic change and selection – to develop proteins that solve mankind's chemical problems," the Royal Swedish Academy of Sciences said in a statement on awarding the 9 million Swedish kronor ($1 million) prize.

Arnold, just the fifth woman to clinch chemistry's most prestigious honor, won one half of the 9 million kronor, while Smith and Winter shared the other half.

The trio used the same principles of evolution -- genetic change and selection -- to develop proteins used in a range of fields.

"They have applied the principles of Darwin in test tubes. They have used the molecular understanding we have of the evolutionary process and recreated the process in their labs," the head of the Academy's Nobel Chemistry committee, Claes Gustafsson, told reporters.

"They have been able to make evolution many thousands of times faster and redirect it to create new proteins."

Arnold, 62, who has survived breast cancer and is a single mother to three sons, is a professor of chemical engineering at the California Institute of Technology.

Her method of rewriting DNA to mimic evolution has helped solve problems such as replacing toxic chemicals like fossil fuels.

As a result, renewable resources like sugar cane are being converted into biofuels. More environmentally friendly chemical substances are being developed, improving everyday products such as laundry and dishwashing detergents to enhance their performance in cold temperatures.

"The most beautiful, complex, and functional objects on the planet have been made by evolution. We can now use evolution to make things that no human knows how to design," Arnold said in 2016.

"Evolution is the most powerful engineering method in the world, and we should make use of it to find new biological solutions to problems," she said.

"Instead of pumping oil out of the ground for making gasoline, now we can use sunlight stored in plants."

Meanwhile, Smith, of the University of Missouri, and Winter, a 67-year-old genetic engineer at the MRC Laboratory of Molecular Biology at Cambridge, developed an "elegant method" known as phage display, where a bacteriophage -- a virus that infects bacteria -- can be used to evolve new proteins, the jury said.

Pharmaceuticals for rheumatoid arthritis, psoriasis and inflammatory bowel diseases have resulted from their research, as well as antibodies that can neutralize toxins, counteract autoimmune diseases and cure metastatic cancer.

"The discoveries by George Smith and Greg Winter are having an enormous impact, particularly on medicine with antibody drugs that have fewer side effects and are more efficient," Goran Hansson, the head of the Royal Swedish Academy of Sciences, told reporters.

Alfred Nobel, who created the prizes in his will, was himself a chemist and devised his famed awards in part to atone for inventing dynamite.

Arnold, Smith and Winter will receive their prize from Sweden's King Carl XVI Gustaf at a formal ceremony in Stockholm on Dec. 10, the anniversary of Nobel's 1896 death.

Earlier this week, two immunologists, James Allison of the US and Tasuku Honjo of Japan, won the Nobel Medicine Prize for research into how the body's natural defenses can fight cancer.

A trio of physicists -- Arthur Ashkin of the US, Gerard Mourou of France and Donna Strickland of Canada -- shared the Physics Prize for inventing optical lasers now used in corrective eye surgery and in industry.

The peace prize will be announced on Friday, and the economics prize will wrap up the Nobel season on Monday, Oct. 8.

For the first time since 1949, the Swedish Academy has postponed the announcement of the 2018 Nobel Literature Prize until next year, amid a #MeToo scandal and bitter internal dispute that has prevented it from functioning properly.