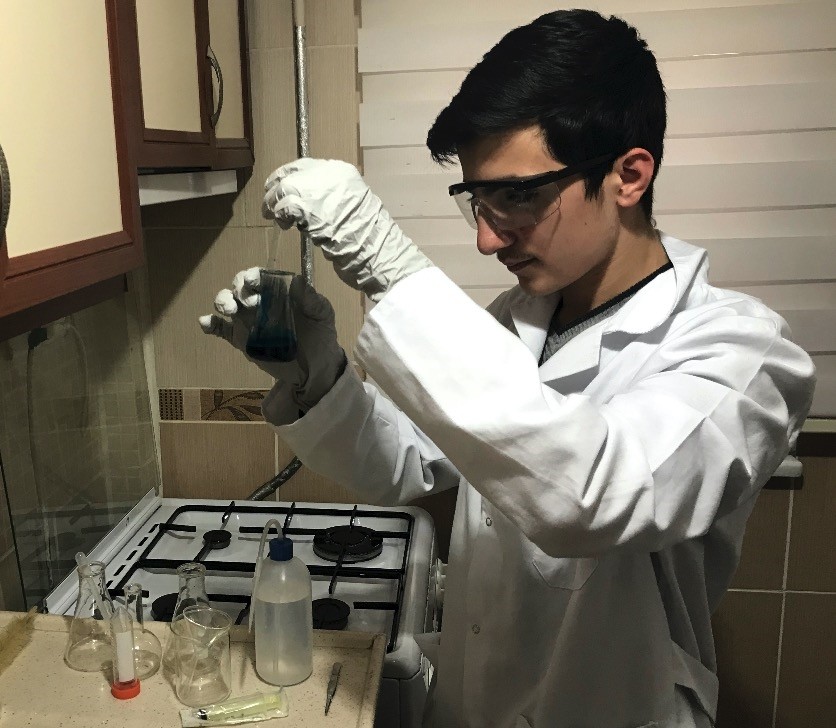 High school students Emirhan Belli and Serkan Aslan managed to reach the semifinals at the Google Science Fair with their project that produces bioplastic from vegetable and fruit waste.

Belli, an 11th grade student at Borsa Istanbul Başakşehir Vocational and Technical Anatolian High School, was inspired by the news of environmental pollution and began to work on producing plastic that does not harm nature.

Serkan Aslan, another 11th grade student at Şehremini Anatolian High School, was included in the project. The students first turned vegetable and fruit peels into a paste-like thing in the kitchen of Belli's house after getting the necessary laboratory supplies and chemicals from a university and the municipalities' labs.

The paste was then turned into granulates after being dried in the oven where Belli's mother bakes food and pies.

The Google Science Fair is open to young scientists aged 13-18.

Belli and Aslan are waiting for support to turn the granules they have produced into proper plastic and for the final that will be held in May next year.

Chemical department student Belli, said in a statement to Anadolu Agency (AA) that normal plastic does not dissolve in nature for years and thus causes environmental pollution because it is a derivative of petrol.

He said that he was affected by news of environmental pollution and he set out with the idea that organic waste could be used to find a solution. When he started researching the issue, he learned that bioplastics are produced from food waste.

Belli added that they boiled the beaker on a regular stove because they do not have financial backing. They also used his mother's oven instead of a laboratory oven.

Emphasizing that they obtained a small plastic sample as a result of their work, the student said, "We need to work in a laboratory to make progress. We use fruit and vegetable peels which contain starch in their structure. We took the waste of vegetables and fruits and researched what we could do with them. We mix the apple peel with various chemicals and mashed it. We put it in the oven after boiling it and left it there for a day."

He stated that they do not have the authority to acquire the chemicals they use individually and so they obtained them from universities and municipalities.

Explaining how they participated in the Google Science Fair, Belli continued, "We were the only participants from Turkey. We went on to the semifinals. We sent our project in writing but we have to present our work in a laboratory for the final, we need to make the plastic. In particular, we would like to make products such as plates, cups, spoons, forks touching foods. The plastics we use dissolve over 450 years in nature. I've tried it on granules; bioplastic can dissolve in two weeks. We've granulated the latest organic waste. Metal complex will be applied and it will be hardened but we do not have a laboratory environment. Ten people will compete in the final."

When he told his family he wanted to use their kitchen to produce bioplastics, his family supported him. Belli stressed that he would be able to study abroad with the help of the project's award.

Emphasizing that the project is highly promising Serkan Aslan said, "The cost of bioplastics is much cheaper than petrol-derived plastic. It is also possible to use waste for recycling. The petrol-derived plastic is carcinogenic but bioplastic does no harm. Since it dissolves in two weeks, it does not pollute nature. Bioplastic is very easy to dissolve in water and soil, and can even act as fertilizer in soil. The most important feature of our project is that it does not harm creatures and nature. We named our project 'Bellan,' which is the combination of our surnames. We are trying to set up a website and create social media accounts. "