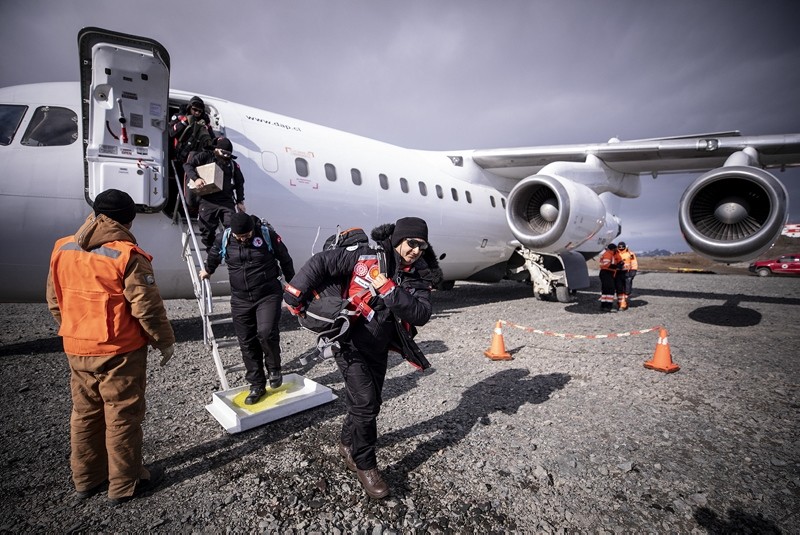 Turkish research team arrives in King George Island off the coast of Antarctica in the Southern Ocean. (AA Photo)
by Daily Sabah with AA Feb 04, 2019 12:43 pm

As a part of the third National Antarctic Science Expedition, a Turkish team of scientists finally set foot on Antarctica on Monday.

The journey, which took nearly a week with five flights, started on Oct. 29 in Istanbul, Turkey.

The first destination of the team of 17 scientists was Sao Paulo, the capital of Brazil. The group then traveled to the Chilean capital Santiago. After a 30-hour journey in total, the team arrived in the far southern Chilean town of Puerto Williams. After a two-day stop at the "last settlement point" on the southern hemisphere, they reached King George Island in Antarctica via a two-hour flight.

This year's project, supported by the Turkish Presidency, Ministry of Industry and Technology and Istanbul Technical University Polar Research Center as well as eight other Turkish universities, will carry out scientific studies over 30 days.

Associate professor Burcu Özsoy, the leader of the 3rd National Antarctic Science Expedition, said they are very motivated and it was an exciting trip for those who set foot on the South Pole for the first time.

National free diver Şahika Ercümen who is part of the team said she is extremely excited to dive in the South Pole. "It is a great honor to be among all these incredible scientists," she said.

Two automatic meteorological monitoring stations produced in Turkey will also be set up by the country's Directorate General of Meteorology to receive data for two years.

The Turkish team and their 46 pieces of luggage including scientific materials weighing nearly 1,500 kilograms were carefully inspected to make sure they were not carrying any living organism under the Antarctic Treaty System upon landing on the frozen continent.

Antarctica, the coldest continent on earth, has served as a scientific research zone since a 1959 treaty. Turkey, which currently holds observer status, aims to get consultative status on the continent.

Turkey's Istanbul Technical University Polar Research Center was founded in Antarctica in 2015. The mission of the center is to carry out research on Antarctica and raise Turkey's profile in the international scientific community.

In April 2016, the first-ever Turkish team of researchers, 14 medics, botanists, geologists and oceanographers from seven universities, traveled to Antarctica to study the impact of climate change.

With the third expedition, Turkey looks to become a "consultant country," in the new term of the Antarctic Treaty System and continue scientific studies at its own base.