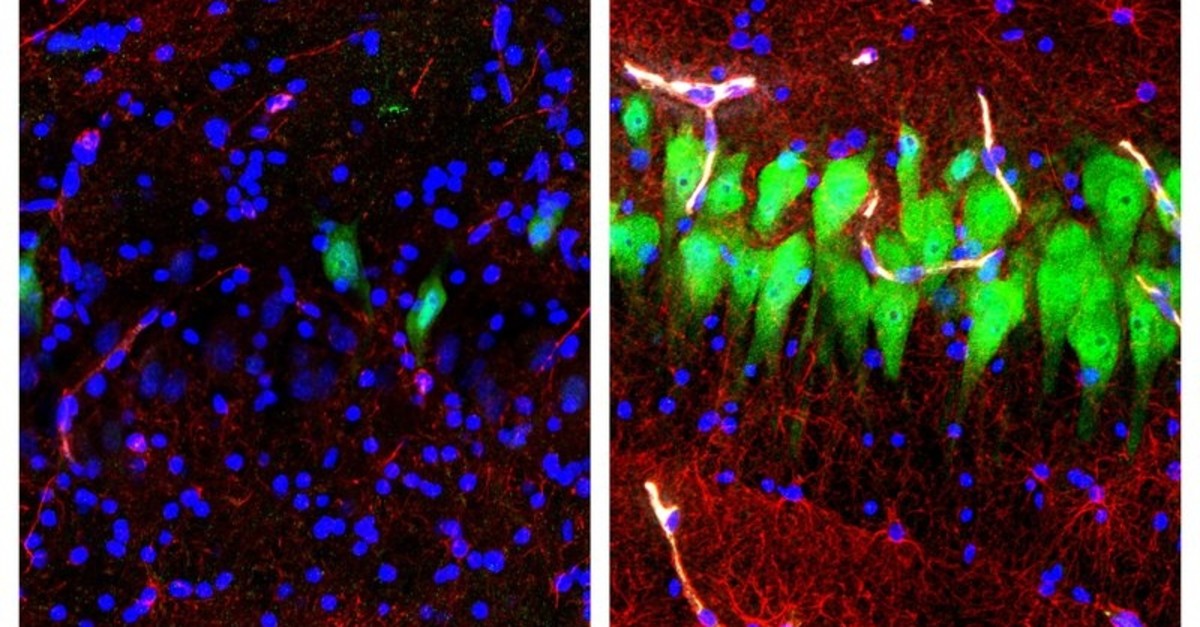 Images provided by the Yale School of Medicine in April 2019 shows stained microscope photos of neurons, astrocytes, and cell nuclei from a pig brain left untreated for 10 hours after death, and another with a blood substitute. (AP Photo)
by Associated Press Apr 17, 2019 8:41 pm

Scientists restored some activity within the brains of pigs that had been slaughtered hours before, raising hopes for some medical advances and questions about the definition of death.

The brains could not think or sense anything, researchers stressed. By medical standards "this is not a living brain," said Nenad Sestan of the Yale School of Medicine, one of the researchers reporting the results Wednesday in the journal Nature.

But the work revealed a surprising degree of resilience among cells within a brain that has lost its supply of blood and oxygen, he said.

"Cell death in the brain occurs across a longer time window than we previously thought," Sestan said.

Such research might lead to new therapies for stroke and other conditions, as well as provide a new way to study the brain and how drugs work in it, researchers said. They said they had no current plans to try their technique on human brains.

The study was financed mostly by the National Institutes of Health.

The 32 brains came from pigs killed for food at a local slaughterhouse. Scientists put the brains into an apparatus in their lab. Four hours after the animals died, scientists began pumping a specially designed blood substitute through the organs.

The brains showed no large-scale electrical activity that would indicate awareness. Restoring consciousness was not a goal of the study, which was aimed instead at exploring whether particular functions might be restored long after death.

After six hours of pumping, scientists found that individual brain cells in one area of the brain had maintained key details of their structure, while cells from untreated brains had severely degraded. When scientists removed these neurons from treated brains and stimulated them electrically, the cells responded in a way that indicated viability. And by studying the artificial blood before it entered the treated brains and after it emerged, researchers found evidence that brain cells were absorbing blood sugar and oxygen and producing carbon dioxide, a signal that they were functioning.

They also found that blood vessels in treated brains responded to a drug that makes vessels widen.

Sestan said researchers don't know whether they could restore normal whole brain function if they chose that goal. If such consciousness had appeared in the reported experiments, scientists would have used anesthesia and low temperatures to quash it and stop the experiment, said study co-author Stephen Latham of Yale. There's no good ethical consensus about doing such research if the brain is conscious, he said.

Researchers are now seeing if they can keep the brain functions they observed going for longer than six hours of treatment, which Latham said would be necessary to use the technology as a research tool.

Christof Koch, president of the Allen Institute for Brain Science in Seattle, who didn't participate in the study, said he was surprised by the results, especially since they were achieved in a large animal.

"This sort of technology could help increase our knowledge to bring people back to the land of the living" after a drug overdose or other catastrophic event that deprived the brain of oxygen for an hour or two, he said. Unlike the pig experiments, any such treatment would not involve removing the brain from the body.

The pig work also enters an ethical minefield, he said. For one thing, it touches on the widely used definition of death as the irreversible loss of brain function because irreversibility "depends on the state of the technology; and as this study shows, this is constantly advancing," he said.

And somebody might well try this with a human brain someday, he said. If future experiments restored the large-scale electrical activity, would that indicate consciousness? Would the brain "experience confusion, delusion, pain or agony?" he asked. That would be unacceptable even in an animal brain, he said.

In a Nature commentary, bioethicists Stuart Youngner and Insoo Hyun of the Case Western Reserve School of Medicine in Cleveland said if such work leads to better methods for resuscitating the brain in people, it could complicate decisions about when to remove organs for transplant.