Bursa Technical University students designing 'Octocopter' to compete in US 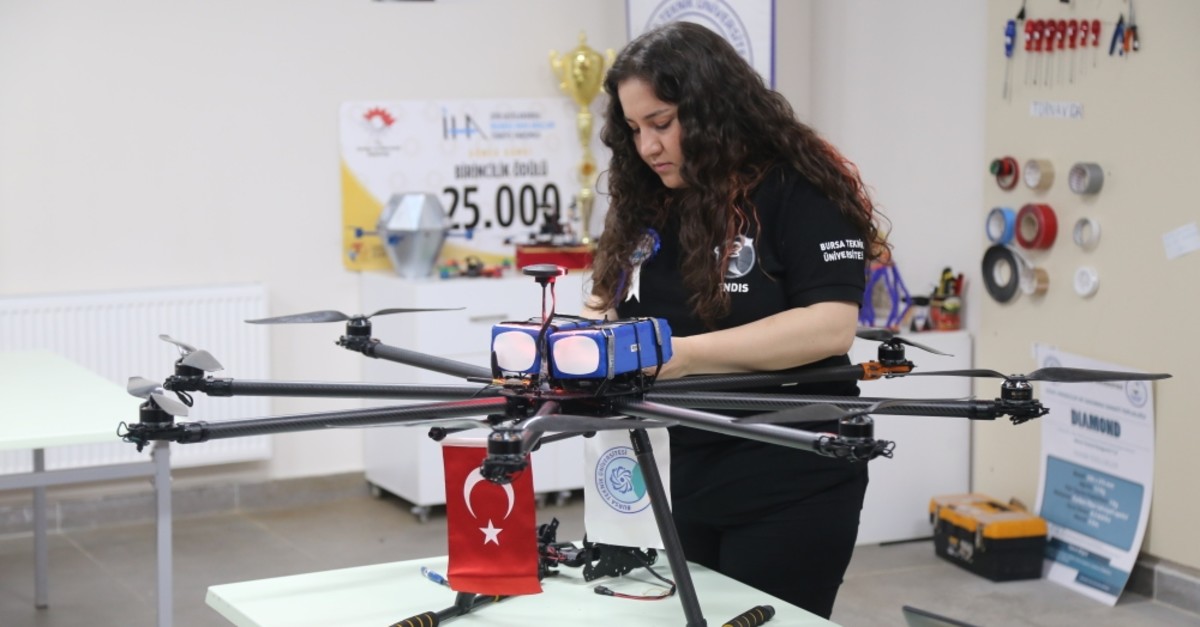 Designed by Bursa Technical University (BTU) students, an eight-engine, propeller-driven drone called an "octocopter," capable of carrying up to 15 kilograms of cargo, with a half-hour flight time and a 10-kilometer range is set to represent Turkey at the Association for Unmanned Vehicle Systems International Student Unmanned Aerial Systems Competition (AUVSİ SUAS Competition) in Maryland, U.S.

Established three years ago under the BTU Space, Aviation and Defense Industry Society, the BENDİS team has designed a new drone and applied to the competitions abroad this year. The team came in first in the "Rotary Wing Unmanned Aerial Vehicles [UAV]" category at the Scientific and Technological Research Council of Turkey (TUBITAK) International UAV Competition held under the scope of Turkey's first aerospace and technology festival, Teknofest, last year.

BTU students, who will participate in AUVSİ SUAS Competition scheduled for June 12-15 in Maryland, will wave the Turkish flag in U.S. skies.

In an interview with Anadolu Agency (AA), BTU rector professor Arif Karademir stated that despite being a young university founded in 2010, they are striving to support the development of Turkey in the field with the project and have conducted training at their high-level laboratories.

Indicating that there are more than 50 student clubs at the university, Karademir said: "As President Recep Tayyip Erdoğan has stressed, our students are asked not only to attend classes and courses but also to become organized among themselves in social and technical areas of specialization and to focus on projects. Students abroad and in developed countries are preparing for life in this way."

According to Karademir, BTU has students working on social sciences, as well as those working on flying autonomous vehicles and electric cars in engineering disciplines, and highly motivated faculty members supporting them. BTU attended Teknofest with five teams last year.

Pointing out that one of these teams, all of which participated in the competition last year, ranked first in Turkey, Karademir noted: "This year we are participating in Teknofest with 10 teams. Our team, which came in first year last year, will participate in competitions in the U.S., represent Bursa and wave the flag of our country on foreign soil."

Havva Tuğçe Gürsel, a final year undergraduate student in BTU's Mechatronics Engineering Department and the team captain of BENDİS founders, stated that they designed a military vehicle instead of the standard drone for personal use for the competition in the U.S., adding that they made the cut and passed the reporting stages. Gürsel said they developed an octocopter suitable for half an hour flight time, continuing that the octocopter is capable of avoiding large objects and is able to define people and objects by processing images, classifying the objects on the ground and sending the images to the ground station.

"The drone we have developed can autonomously lower the Unmanned Ground Vehicle [UGV] it carries to the specified coordinates. Likewise, the UGV can autonomously transport the humanitarian aid it carries to another designated coordinate. At the competition, we have to carry out this mission scenario in a single flight and autonomously from takeoff to landing. We have worked on this complicated system for almost a year and now, we are conducting our final flight tests and waiting for the day of the competition," Gürsel said.

Özge Özel, a BENDİS pilot and a third-year student of the Electrical and Electronics Engineering Department, shared the following information about the technical characteristics of the drone: "As far as we have searched, there is currently no such vehicle produced in Turkey. Foreign-branded devices are used in disaster and emergency situations. The drone we have developed weighs 8 kilograms and can carry cargo up to 15 kilograms. It has a half-hour flight time and a range of 10 kilometers. Our vehicle with more than one flight modes will fly autonomously at the competition."