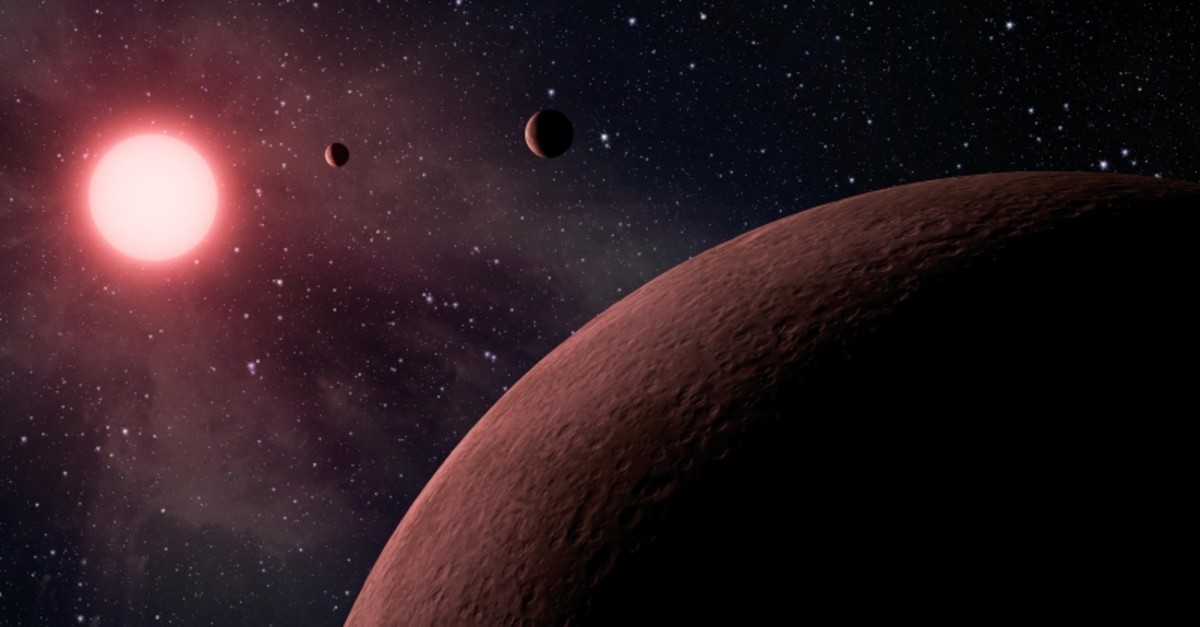 Water has been discovered for the first time in the atmosphere of an exoplanet with Earth-like temperatures that could support life as we know it, scientists revealed Wednesday.

Eight times the mass of Earth and twice as big, K2-18b orbits in its star's "habitable zone" at a distance -- neither too far nor too close -- where water can exist in liquid form, they reported in the journal Nature Astronomy.

"This planet is the best candidate we have outside our solar system" in the search for signs of life, co-author Giovanna Tinetti, an astronomer at University College London, told AFP.

"We cannot assume that it has oceans on the surface but it is a real possibility."

Of the more than 4,000 exoplanets detected to date, this is the first known to combine a rocky surface and an atmosphere with water.

Most exoplanets with atmospheres are giant balls of gas, and the handful of rocky planets for which data is available seem to have no atmosphere at all.

Even if they did, most Earth-like planets are too far from their stars to have liquid water or so close that any H2O has evaporated.

Discovered in 2015, K2-18b is one of hundreds of so-called "super-Earths" -- planets with less than ten times the mass of ours -- spotted by NASA's Kepler spacecraft.

Future space missions are expected to detect hundreds more in the coming decades.

"Finding water in a potentially habitable world other than Earth is incredibly exciting," said lead-author Angelos Tsiaras, also from UCL.

"K2-18b is not 'Earth 2.0'," he said. "However, it brings us closer to answering the fundamental question: is the Earth unique?"

Working with spectroscopic data captured in 2016 and 2017 by the Hubble Space Telescope, Tsiaras and his team used open-source algorithms to analyse the starlight filtered through K2-18b's atmosphere.

They found the unmistakable signature of water vapour. Exactly how much remains uncertain, but computer modelling suggested concentrations between 0.1 and 50 percent.

By comparison, the percentage of water vapour in Earth's atmosphere varies between 0.2 percent above the poles, and up to four percent in the tropics.

There was also evidence of hydrogen and helium as well. Nitrogen and methane may also be present but with current technology remain undetectable, the study said.

Further research will be able to determine the extent of cloud coverage and the percentage of water in the atmosphere.

Water is crucial in the search for life, in part because it carries oxygen.

"Life as we know is based on water," said Tinetti.

K2-18b orbits a red dwarf star about 110 light years distant -- a million billion kilometres -- in the Leo constellation of the Milky Way, and is probably bombarded by more destructive radiation than Earth.

"It is likely that this is the first of many discoveries of potentially habitable planets," said UCL astronomer Ingo Waldmann, also a co-author.

The new generation of space-based star gazing instruments led by the James Webb Space Telescope and the European Space Agency's ARIEL mission will be able to describe exoplanet atmospheres in far greater detail.

ARIEL, slated for a 2028 launch, will canvas some 1,000 planets, a large enough sampling to look for patterns and identify outliers.

"Over 4,000 exoplanets have been detected but we don't know much about their composition and nature," said Tinetti. "By observing a large sample of planets, we hope to reveal secrets about their chemistry, formation and evolution."