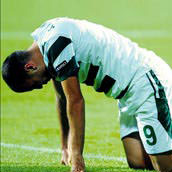 Manchester United moved to the brink of qualifying for the last 16 of the Champions League after second-half goals from Darren Fletcher, Gabriel Obertan and Bebe sealed a 3-0 romp over Bursaspor today.

The English side, without injured striker Wayne Rooney, had far too much firepower for the Turkish champions who were well beaten after second-half goals from Darren Fletcher, French forward Gabriel Obertan, his first for United, and Bebe. "We were in control of the match although they did have a couple of half chances," United manager Alex Ferguson said. "You can never be sure but the second goal killed the match." Ferguson was able to field a number of fronge players in Chris Smalling, Obertan and Bebe and Ferguson was delighted with their contribution. "They did very well - very pleased with them. Giving them an experience like tonight is as important as anything. But they did perform well too. Obertan's career has beeen derailed a bit because of injuries... but he is training well and he showed, as we know of him, he has a classic talent." United top Group C with 10 points and a draw against Rangers in their next game will seal qualifcation to the knockout stage with a game to spare. United had looked the more composed and fluid throughout the first half, despite the piercing jeers of the home fans and the loss of winger Nani who went off with a groin injury midway through the first half. Turgay Bahadir wasted the best chance for Turkish champions Bursaspor when he delayed his shot just long enough for Edwin van der Sar to move smartly out of his goal to save. Paul Scholes had a goal disallowed in the 39th minute after handling the ball with his arm, to the disappointement of the small group of visiting fans watching from behind a giant protective net. Fletcher, who picked up an ankle injury and could miss this weekend's Premier League clash with Wolves, struck the opener on 48 minutes with a fine finish from Michael Carrick's pass. The goal did spark the home side into life with van der Sar saving from Ivan Ergic and Federico Insua as Bursaspor, still awaiting their first Champions League goal, gave their fans a few moments of hope. United quickly put the game beyond them though when Obertan rifled in on 73 minutes and then Bebe slotted home four minutes later. Bursaspor are still seeking their first point and downcast coach Ertugrul Saglam said: "Our hope was to score the first goal and go on to win. "We are getting better, and gathering experience by playing these world class opponents."
-REUTERS-
Last Update: Nov 03, 2010 8:36 pm
RELATED TOPICS