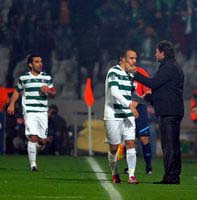 Sercan Yildirim's second-half equalizer gave Bursaspor a 1-1 draw with Rangers on Tuesday, the only point the Turkish club collected in Group C of the Champions League.

Sercan collected a pass from Ozan Ipek to shoot past goalkeeper Allan McGregor in the 79th minute.

Rangers led through Kenny Miller's 19th-minute strike, smashing in a cross from Steven Whittaker into the top corner.

Rangers finished third in the group with six points and will play in the Europa League. It will be the first time the Scottish club continues in European competition after Christmas since 2007, when it lost 2-0 in the UEFA Cup final to Zenit. St Petersburg.

Bursaspor came last in the group after losses in all five previous games. Manchester United and Valencia went through in that order to the last 16.

"We played well: we got into positions, we got the goal and then created even more chances," Bursaspor coach Ertugrul Saglam said. "We did everything we could against a team which played so defensively. I can guarantee that next year, if we qualify, we will perform much better."

Saglam had made eight changes to his starting lineup, including leaving out winger Volkan Sen, who was sent off for protesting against a yellow card during Bursaspor's Turkish league game versus Besiktas at the weekend.

Rangers manager Walter Smith fielded his regular team despite having already secured qualification to the second-tier club competition, although Darren Cole was given a debut.

Bursaspor dominated most of the posession, with Yildirim driving the home side forward. Rangers' goal came against the run of play and ensured the visitors led into halftime.

Teammate Frederico Insua sent a free kick narrowly over on the crossbar in the 75th minute.

Four minutes later, the hosts were rewarded for their pressure — Yildirim collecting the cross from the left flank and finding the net despite McGregor getting a hand on the ball.

Yildirim almost made it 2-1 soon after, dribbling into the box but failing to hit the target.

"We applied pressure but we just could not find the second goal," Yildirim said. "If we had, things would have been better for us."