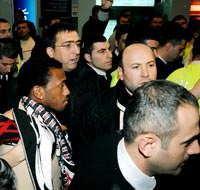 Fernandes, a Portuguese footballer of Cape Verdean descent, was welcomed by dozens of Turkish fans at Ataturk Airport.

"I am just really excited to be here and try to help the club," Fernandes told reporters at the airport. "I am planning to help them in the league and every competition they are involved," he added.

The 25-year old footballer played for Benfica, Portsmouth and Everton before joining Valencia in August 2007 in a deal worth 18 million Euros.