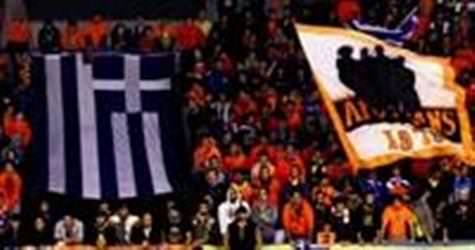 Cyprus police said Wednesday that their timely intervention prevented Greek Cypriot fans from harming players from a Turkish basketball team after a Eurochallenge cup game in the capital turned ugly.

Three youths aged 15 were arrested following the outbreak of hooliganism at the Eleftheria indoor stadium in Nicosia on Tuesday night. Police needed to use tear gas to disperse a crowd after violence erupted at the close of the game between APOEL Nicosia and Pinar Karsiyaka of Izmir. The attack on the visiting team was described as "unprovoked" with nothing that happened during the match - "played in a sporting atmosphere" -- warranting such behaviour. Police spokesman Michalis Katsounotos said swift action by officers at the scene prevented any serious harm to the Turkish players or staff. But Karsiyaka club spokesman Gokhan Sensan said he sustained a broken finger during the crowd trouble and coach Hakan Demir charged that the Cyprus police had been "overwhelmed".

"As soon as the game ended, a section of APOEL fans started throwing objects at the Turkish team," the police spokesman told the Cyprus News Agency.

"The Turkish basketball players were escorted to the dressing room without anyone being injured," Katsounotos said.

"At the same time a group of APOEL fans tried to enter the players' locker room but were prevented from doing so."

Following the attack on the players some 500 fans turned their attention on the police throwing rocks at them and trashing the stadium.

Police vehicles ferrying reinforcements to the stadium were also pelted with stones.

Five officers received hospital treatment for minor cuts and wounds after the trouble.

The Karsiyaka coach told Turkish Cypriot reporters that he had been "very frightened because they really wanted to kill us".

"Around 1,000 spectators poured on to the court and we were chased right into the dressing rooms with batons, clubs and stones," Demir said.

"They also threw tear-gas canisters. The police were completely overwhelmed."

Turkey's ambassador to the breakaway north of Cyprus, Kaya Turkmen, lodged a formal complaint with the UN peacekeeping force on the island demanding measures to guarantee the security of the Karsiyaka players.

Sporting contact between Turkish and Greek Cypriot teams is infrequent as Turkey has no relations with the island's internationally recognised Greek Cypriot government, instead extending recognition to the breakaway Turkish Cypriot authorities in the north.

The island has been divided since 1974 when Turkish troops occupied its northern third in response to an Athens-backed Greek Cypriot coup seeking union with Greece.

APOEL ultras have a reputation for causing trouble, especially among the club's hard core of nationalist sympathisers.

On the handful of occasions teams from the two countries have met to play football, basketball or handball, there has been no violence on this scale.

However, Cyprus has suffered a perennial hooligan problem with fighting and vandalism almost commonplace at sporting arenas, even at volleyball fixtures.

The Greek Cypriot club won Tuesday night's game 82-80 but failed to progress in the competition.