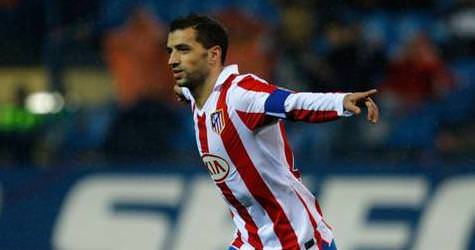 "It's difficult for me to talk right now. I want to thank the club for having faith in me and paying so much to Benfica to sign me," said Simao, who joined Atletico in 2007 from Portuguese side Benfica for 20 million euros.

"I don't think I have defrauded anyone. When I arrived I said I would do my best to win a title and I eventually ended up with two in Europe," he added, fighting back tears.

The 31-year-old winger helped Atletico win the Europa League in 2007 and the European Super Cup in 2010 and was popular with his teammates and fans, but his contract with the Spanish side was set to expire at the end of the season.

Atletico president Enrique Cerezo hailed Sabrosa as "an example of professionalism, commitment and dedication to his work."

Sabrosa scored the only goal of Atletico's 1-0 win over Espanyol in the King's Cup on Wednesday in his final appearance for the team.