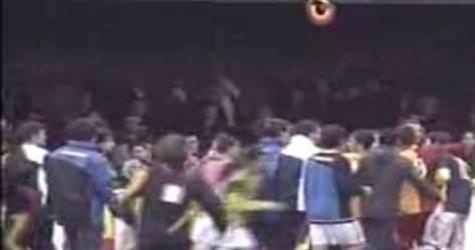 Police have detained two Galatasaray fans after an attack on Fenerbahce players during a men's under-17 match in Istanbul.

Fenerbahce says one player had his nose broken and several others were beaten by Galatasaray fans Sunday. A picture posted on the club's website shows a man kicking a Fenerbahce player. Video aired Monday showing another man, wearing a Galatasaray jersey, kicking a member of the team in the chest.

According to media reports, 13 Fenerbahce players were hospitalized after the incident which began when some Galatasaray fans intervened during a verbal argument between two rival players as they left the pitch at halftime.

Galatasaray has apologized on its website after the match was suspended. The score was 1-1.