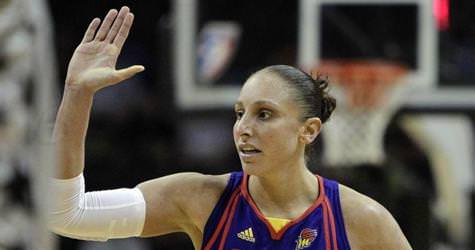 The Turkish basketball federation did not immediately confirm the reports by the Dogan News agency and private NTV news channel. Neither news outlet cited a source.

An official at Taurasi's Turkish club, Fenerbahce, also would not confirm the report and said the team had not been notified of the result. A message left with Taurasi's agent was not immediately returned.

The Phoenix Mercury standout and former Connecticut star tested positive for the stimulant modafinil while playing in Turkey's professional league. She was tested following a league game Nov. 13 and the positive result was confirmed last month.

Taurasi had been provisionally suspended by Fenerbahce pending the result of her "B" sample test, which was analyzed at the doping lab at Hacettepe University in Ankara.

Modafinil is used to counter excessive sleepiness due to narcolepsy, shift-work sleep disorder or sleep apnea, according to drug manufacturers.

Taurasi led the WNBA in scoring for a league-record fourth straight year, averaging 22.6 points. The five-time All-Star and two-time WNBA champion signed a multiyear contract extension with Phoenix in August.

She played in Russia for four years for powerhouse Spartak before joining the Turkish League this season. Taurasi was leading the league in scoring with 24.6 points a game.

Taurasi is one of many American stars who play overseas in the winter because salaries are significantly higher than the WNBA's summer league.

If the positive "B" sample finding is confirmed by Turkey's basketball federation, it could lead to a ban of up to two years for Taurasi. It could also put Taurasi's 2012 Olympics standing with the U.S. national basketball team in jeopardy.

The International Olympic Committee bars any athlete given a doping penalty of six months or more from competing in the next games. She has helped the team win gold medals at the past two Olympics and was the leading scorer at the world championships, which the Americans won in October.

Meanwhile, two of Taurasi's teammates at Fenerbahce resisted doping tests in Turkey because they do not trust the lab that tested her samples, Turkey's Haberturk newspaper said.

Penny Taylor of Australia and Hana Horakova of the Czech Republic provided samples only after the Turkish federation agreed to send them to Germany for testing at a lab in Cologne.

The two players were tested after Fenerbahce's Turkish league game against Besiktas on Sunday. A Fenerbahce official confirmed the report.

Modafinil has been involved in several major doping cases, including that of U.S. sprinter Kelli White, and is on the World Anti-Doping Agency's list of banned substances.

White won the 100- and 200-meter races at the 2003 world championships in Paris, but both her medals were stripped after she tested positive for the stimulant.