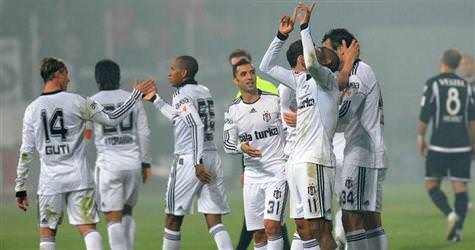 With a new mix of stars, Beşiktaş managed to pull past Manisaspor last night, and with two assists and a goal, Guti came out shining. With last night’s 3-2 win, Beşiktaş has now acquired six points in Group B of the Turkey Ziraat Cup, securing the group’s leadership position.

Before all else, last night's game was an enjoyable 90 minutes. Manisaspor must be congratulated. They consistently went for the goal and brought esthetics to the game. Beşiktaş on the other hand, was two-faced. The rear was partially left in charge to domestic players, and sometimes there were errors with positions frequently handed over to their competitors. The offensive strength was provided by the stars, with Simao and Almeida, with last-minute licenses, in the starting line-up. There were six other foreigners in addition to the previously mentioned too, and therefore the 'black eagles' went out with a total of eight foreign players last night. (Both Nobre and Aurelio played as Turkish nationals.) Guti received top billing however, and with two assists and a goal, he carried Beşiktaş to a win.

Quaresma was all over the place. He was everywhere, but it was an independent game he played and at times veered towards showing off, which did result in harming Beşiktaş from time to time! It was the first game for Simao and Almeida and they didn't really stand out. But, as already stated, it was their first game. Crazy Schuster didn't make a player change for 83 minutes.

As for goals and certain significant moments in the game, in the 18th minute, Manisaspor took the lead. First, Cenk diverted a shot by Simpson, however when Simpson tried his luck again, this time he managed to score, 1-0. In the 34th minute, Beşiktaş secured a draw, with an assist by Guti which turned into a goal with a header by Sivok, who donned a uniform for the first time in months, 1-1. Having withdrawn due to the pressure exerted by Beşiktaş, Manisaspor paid the price with yet another goal in the 37th minute. A center pass from Guti was met by Nobre, who went on to score his first goal in the Turkey Ziraat Cup, 1-2. After another attempt by Nobre was returned by the goal post in the 40th minute, Beşiktaş went into half-time with a 2-1 lead.

MESSİ- ÖMER TAKES THE STAGE
The second half was truly exciting. Manisaspor pulled out all of the stops to take the lead. For awhile there, after the 70th minute, they even turned the game into a single goalpost match. In the 73rd minute, Makukula missed an opportunity, and in the 74th minute, Mehmet Güven's shoot was difficultly diverted by Cenk. In the 77th minute of the game however, we witnessed a Messi-type goal by Ömer Aysan, who entered into the field with fancy footwork and shot a magnificent goal for Manisaspor, 2-2. In the 82nd minute, Hilbert was brought down in the penalty field and the referee granted the shot, which Guti scored. Beşiktaş took the lead once again by 3-2 and successfully started off 2011 with a win.
.