Five-star Beşiktaş puts on a show: 5-1 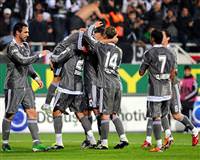 Fortifying the team with worldwide stars, Beşiktaş started off the second half of the Spor Toto Süper League in magnificent fashion last night.

Beşiktaş hosted Bucaspor in the Fi Yapi İnönü Stadium and managed to secure a 5-1 win. Nobre and Guti both scored two goals each, and Simao's goal made it five for the team.
Beşiktaş is turning a new page… Not only has BJK TV, Beşiktaş's own private television station reopened to broadcast, but with players Simao, Quaresma, Almeida and key player Guti, last night the team displayed perfect sound and visual quality… With the addition of three new Portuguese players, Almeida, Simao and Fernandes, adding to the team's superstar transfers of Quaresma and Guti, last night the team drew open the curtains to the second half of the league, by putting on a show.
The show started in the 8th minute. A corner shot from Guti was met with a header by Nobre and in his classic style, a score: 1-0. In the 18th minute, while Nobre was once again seeking another score, which Beto blocked with his hand leading to a penalty call for the hosts. Guti shot and Guti scored, bringing the score up to 2-1.

WATCH THIS TEAM IN İNÖNÜ!

In the 44th minute, Quaresma took a shot, and Erman took a dive as if he was the goalkeeper. Just as thoughts of the possibility of another penalty shot began to surface, Simao took advantage of the ball in front of him, and said 'hello' to his new team, turning the position into a score: 3-0.While the first half of the game came to a close with nice passes, fancy goals and a show in the tribunes, all we could do was wonder what was next for the second half.

There was no need to worry however, as the game resumed with both tempo and goals… In the 64th minute, Nobre did not turn back an offering by İsmail and brought the score up to 4-0 for the hosts. In the 75th minute, Guti's powerful strike brought the score up to 5-0. One minute later, Bucaspor responded with a consolation goal scored by Musa and determined the game's final outcome; 5-1.


THEY ARE IN THE SPIRIT…
The battle for a uniform in this new star-studded Beşiktaş worked best to Mert Nobre's favor yesterday. While not only scoring twice into Bucaspor's goal post, the total six goals shot by Nobre have all been with headers. With two headers against K.Karabük and one each against Ankaragücü and Galatasaray already this season, yesterday Nobre continued his successful tradition. Meanwhile, yesterday's game against Bucaspor was also significant for the experienced player for one other reason… Last night's game was the 200th match Nobre has played in for the Süper League.

Guti also notably proved his worth last night against Bucaspor with two goals and an assist to his name.