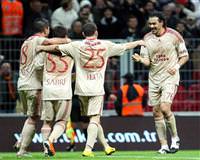 Just three days ago, the Galatasaray President Adnan Polat exclaimed the words… “Not a lamb, but a lion.” His team and especially Servet came through like a gladiator last night scoring Galatasaray’s first official goal in the all-new TT Arena.

After the unfortunate incidents which transpired on the January 15th opening of the new stadium, last night when the starting whistle blew, it was obvious that the love of the game won out over, politics, words, analysis, transfers unmade and promises not kept… The fans only had love last night for their red and yellow lions, and the stadium looked beautiful for it.
This is a new start for Galatasaray. Despite Sivasspor's fouls and attempts to break them down, Galatasaray was able to establish control of the game, and to keep Sivasspor under a blockade from the first half on. However, they struggled to display a game reminiscent of saying 'hear me roar.' There were some visible positive developments however… New transfers Juan Culio appears to have adapted well to the team and Yekta Kurtuluş appeared to don his uniform in stride. However, appears, it will be a little while until the team collectively functions like a 'well-oiled machine'.
The names to stand out last night were Emre Çolak, Yekta, Culio and Kazım (and Bogdan Stancu, from the 68th minute on). As for Sivasspor, goalkeeper Korcan could be considered their player of the night.
In the second half, exhausting themselves to continue their command of the game, Galatasaray made a series of attempts to score, the likes of which made one ask,' how could they miss?' However, one of those attempts was turned into a goal by Servet in the game's 70th minute. Thereby turning Servet, who was booed in the previous Ali Sami Yeni Stadium, into the first to score in the TT Arena, coupled by the cheers that come with that honor. That's life for you! Galatasaray: 1 - Sivasspor: 0