Let’s meet at the Anatolian summit! 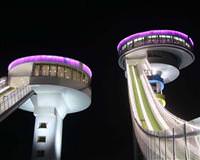 As today marks the start of the Erzurum Winter Games facility, the largest investment in a sports venue in the history of the republic, hosting the Winter Universiade, the momentous event, which continues until February 6th, will kick off with a magnificent show by this evening by Anadolu Ateşi.

The four year countdown has finally come to an end. Students from all over the world have arrived in Erzurum to participate in the 25th World University Winter Games, the Erzurum Universiade 2011, which begins today and will continue until Sunday, February 6th.
Almost 3,000 athletes from 58 different countries have arrived in Erzurum to compete for a medal. Constituting the most significant investment in a sports facility in the history of the Republic, the facilities built in Erzurum for the Winter Games cost approximately 600 million TL.
President Abdullah Gül and Prime Minister Recep Tayyip Erdoğan will be in attendance for tonight's grand opening of the Winter Universiade, which will take place at 19:30 tonight. All eyes and ears in Turkey will be on Erzurum. The opening will also include a brilliant show by Anadolu Ateşi which will be broadcasted to viewers by TRT.
153 TURKISH ATHLETES TO COMPETE
Turkey has 153 Turkish athletes, 74 female and 79 males, and 52 managers competing in the Winter Games this year. The highest number of Turkish participants is in the snowboarding category with 18 Turks competing. Russia has the highest number of participants overall with 257 competitors.
Oglago to carry the flag…
Turkish cross country skier Sabahattin Oglago will carry the Turkish flag during the opening ceremony. The Universiade Erzurum-2011 torch will be carried by motorcyclist Kenan Sofuoğlu, wrestler Selçuk Çebi, volleyball player Neslihan Darnel and disabled female archer Gizem Girişmen. The athletes' oath will be read by skier Tuğba Daşdemir.
The new stadium will be on display!
Set to host both the opening and closing ceremonies of the 2011 Universiade, the Cemal Gürsel Stadium underwent a complete renovation for the Winter Games. The larger section of the stadium was torn down and rebuilt into a 21,000 spectator capacity stadium. With new grass on the football field and the renovation of the entire field, Turkey can now add one more modern stadium to the list.