Fenerbahçe says farewell to the cup with a 2-1 victory 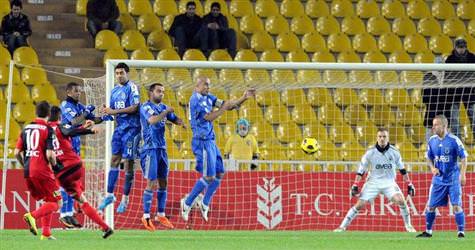 Last night’s final game for the Ziraat Turkey Cup Group C saw Fenerbahçe saying farewell with a win and Gençlerbirliği moving on despite a loss. Semih Şentürk was the star last night by scoring two goals for Fenerbahçe.

Having lost their first three games in the group stage, last night's victory was not enough to put the hosts through, however at least it was an opportunity to please the fans. In actuality, last night may have been a 'historical low' in terms of filling the Şükrü Saraçoğlu Stadium. With the lineup for this Sunday's league game against Trabzonspor set aside, it was obvious last night's game was just a formality for the club.
Fenerbahçe played as if they had no particular purpose, however this may have worked to their advantage as in just the 10th minute of the game they were granted a penalty shot, and Semih scored. In the 20th minute Semih shot a goal once again from a free shot.
Gençlerbirliği was lost for the next 30 minutes however reappeared in the 61st minute with Serkan whose goal brought the score difference down to one.
The most notable moment of the game may have been the moment when Guiza returned to Saraçoğlu for his first official game since the May16th game against Trabzonspor last season which marked their loss of the championship. The low number of fans applauded his entry, however in the 70th minute once again he missed a shot reminding all of his infamous football past in Fenerbahçe. The hosts finished off the game with just ten players due to Caner Erkin's red card.
Despite the loss, Gençlerbirliği moves on up in the Cup accompanied by Bucaspor in Group C.