The fire of youth burns in Erzurum 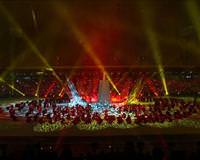 The 25th Winter Games kicked off with a wonderful opening ceremony last night attended by Gül, Şahin and Erdoğan as well as the long awaited snowfall.

Last night's magnificent ceremony for the start of the 2011 Erzurum Universiade was held in the Cemal Gürsel Stadium and kicked off with a cortege of players from around the world.
President Abdullah Gül, Turkey's Speaker of the Grand National Assembly Mehmet Ali Şahin, Prime Minister Recep Tayyip Erdoğan and a number of ministers were all in attendance to witness the grandiose show. The ceremony began with a colorful band entering the stadium followed by the playing of the Turkish National Anthem. Athletes from all over the world then proceeded in alphabetic order to circle the stadium greeting the tribunes. The Turkish athletes were the last to enter the stadium. The tribunes were filled by thousands and officials from the organization distributed white gloves, berets and scarves to protect the spectators from the cold.
GÜL CONDUCTED THE OPENING
The opening of the Winter Games was done by President Abdullah Gül himself. Stating that organizations of this scale usually transpired in big cities such as Ankara, Istanbul and Izmir, Gül stated; "To open the door to the east through this organization being held in Erzurum is a great success for Turkey." Continuing his address by offering thanks to those who exerted efforts for the organization, Gül reminded that the term 'sports' can be defined by the words camaraderie, peace, and chivalry, and stated; "I am sure that these athletes that have arrived from all over the world will compete with chivalry."

CHEERS FOR ERDOĞAN
As Prime Minister Tayyip Erdoğan approached the lectern he was welcomed with intense applause and cheers such as, 'Turkey is proud of you' and 'Erzurum is proud of you.' During his address, Erdoğan stated, "I hope you all get to know Erzurum. These games have five stars. These five stars represent the poetics of five continents meeting. There is peace here. There is brotherhood here. There is love, joy and excitement. I believe that with the hosting of the Winter Games, we can also be the hosts of the Winter Olympics. This would be appropriate for Erzurum and we will realize what is befitting. We will not stop. We will take confident steps towards a very different Erzurum of tomorrow."

WINTER OLYMPICS IS THE OBJECTIVE
Expressing that Turkey has realized an international-level organization with this year's Winter Games, Speaker of the Grand National Assembly Şahin expressed that the new objective is to host the Winter Olympics. Şahin stated the following; "The biggest contribution was made by the Erzurum public. I am one of the closest witnesses to this fact. I have seen it in Austria; I have seen it in Italy… I have seen how Erzurum came together to realize these games being played in Erzurum. I feel the same excitement that you do here now and I feel like I am one of you. With these games, Erzurum has now become a new winter sports center for the region as well as the world. We will soon be organizing the Erzurum Winter Olympics."

EYES FILLED WITH TEARS
The atmosphere at the opening ceremony for the World University Winter Games was emotional for some. The excitement level was at a peak when the Turkish athletes entered the stadium last night. Even the members of state in attendance were touched by the event. As President Gül, Prime Minister Erdoğan and his wife Emine Erdoğan gave a standing ovation to the athletes, the tears which had welled up in their eyes was also of notice. After Prime Minister Erdoğan made his opening address, his wife displayed a nice gesture by holding up his coat for him to wear as he returned to his seat. The 2011 Erzurum Universiade will continue until February 6th. This year's games have broken a record in terms of number of countries participating as well as number of athletes.