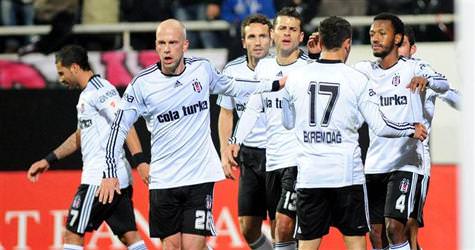 With plans to win 17 out of 17 games to be played in the league, it appears Beşiktaş has also set their sights high for the Turkey Ziraat Cup. Last night’s 5-0 win against Gaziantep Büyükşehir Belediye with goals scored by Bobo (2), Fernandes (2) and Quaresma opens the door to the semifinals.

During the group round Beşiktaş suffered a surprising loss against Bank Asya league team Gaziantep Büyükşehir Belediye and despite being the home team last night speculation did surface questioning whether they would be able to bring in a win.
Schuster came out with a different starting lineup last night, allowing both Ekrem and Necip to don uniforms and also playing Ernst from the start. Hilbert played in the offensive right wing, Hakan substituted an injured Cenk and maestro Guti's role was played by Fernandes last night. After a long time in waiting, Bobo, a trustworthy candidate, also hit the field.
BOBO STARTED THE STORM
The downpour of goals kicked off with Bobo who scored from a pass by Ernst in the 23rd minute. In the 31st minute, Fernandes scored his first goal with Beşiktaş from a ball brought down by Ekrem. Fernandes kicked off the second half with yet another score in the 48th minute from a pass by Hilbert. In the 50th minute, Quaresma was brought down and Bobo granted the shot which he struck straight into the goal's post, bringing his number of goals equal to that of Fernandes. In the 63rd minute, Quaresma took on a free kick shot which resulted in the team's fifth and final score last night, making it obvious why he has earned the 'gang leader' title. As soon as he scored, the Portuguese player ran straight towards Beşiktaş's veteran goal keeper Rüştü to share his joy. Q7 did receive a yellow card last night, which makes him ineligible to play in the return game, on March 2nd. Last night's other quarterfinal contenders, Hir Belediyespor and Kasimpasa had a 0-0 draw. Tonight, Gençlerbirliği hosts Bucaspor, while Gaziantepspor will welcome Galatasaray for the Turkey Ziraat Cup quarterfinals.