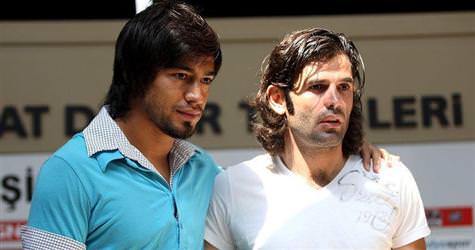 The Beşiktaş administration has officially sent off İbrahim Üzülmez with a ticket issued by technical director Schuster’s report, which reveals the veteran captain punched fellow player İbrahim Toraman twice during the half time of this weekend’s game against Ankaragücü, claiming it was in response to Toraman swearing at him.

As Beşiktaş continues to struggle of late with recent unsuccessful results, it appears the team is facing tough times prior to the important upcoming game against Dinamo Kiev for the UEFA Europa Cup this Thursday night.
Here's what happened during the half time of Sunday night's game against Ankaragücü:
Beşiktaş went into the changing room one goal down. Then, all of a sudden, Üzülmez yells out, "no one can swear at anyone else," and none of his teammates understood what he meant. At that point, Aurelio was heard saying, "Come on pals, let's play tougher." Meanwhile, Üzülmez attacked İbrahim Toraman, who was struggling with his shoelaces, and punched him twice. Other players and the assistant trainers broke the two up and had difficulty calming them down. According to Üzülmez, "I was at fault in their goal. He turned around, spread his arms and rattled profanities at me. So, I hit him." In his defense, Toraman states, "I did spread my arms open, but I didn't swear at him."
After Schuster's reaction, in which he stated; "I have never seen anything like this in all my life," the team went out on the field without Üzülmez…
Yesterday, the administrative board held an extraordinary session to discuss the report submitted by Schuster, which stated, "even if profanities had been exchanged, Üzülmez should not have attacked." The board also assessed the reactions of the team's other footballers who stated that they did not hear any swearing transpire.
Due to this being his second such incident, the board reached a unanimous decision to cancel Üzülmez's contract. After the decision was announced, Üzülmez stated, "He did swear at me however no matter what, I shouldn't have hit him. I have no objections to this penalization." Serdal Adalı and Cengiz Zülfikaroğlu told the 37-year-old captain, "We will miss your presence; however this is the price you have to pay for what you did. You have served this club for 11 years. We will hold your jubilee whenever you choose." With this gesture made, known as Deli İbo (Crazy Ibo), Ibrahim Üzülmez's adventure with Beşiktaş comes to an end.