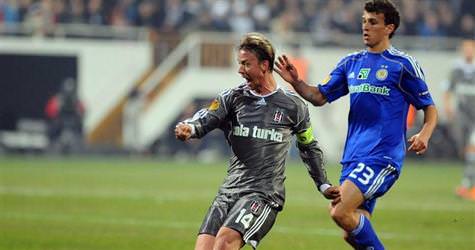 Losing by 4-1 to Dinamo Kiev, last night’s hosts Beşiktaş have left any chance of moving on in the UEFA Europa Cup destined to a miracle.

Last night's first leg of the round of 32 for the UEFA Europa Cup was not a good sign for Beşiktaş's fate in either Europe or at home for this weekend's derby game against Fenerbahçe. Quaresma, the only player to score for last night's hosts, was later sent off with a red card in the game's final minutes.
Every dream has an end. And sometimes we wake to a nightmare… Beşiktaş Cub President Yıldırım Demirören would always say, 'We are a dream team.' The dream ended last night however, and now it's just harsh reality! Beşiktaş has pretty much closed the door on any aspirations in Europe.
Beşiktaş, Turkey's sole remaining representative in European cups has had it tough of late with the surprising departure of the team's veteran captain, İbrahim Üzülmez. Last night's loss however only made Schuster blood boil even further…
The return leg of the second round of the UEFA Europa League will be played in Kiev on February 24th. However for Beşiktaş, it may take a miracle to make up the 4-1 aggregate set by Dinamo Kiev last night.
As for the game's most significant minutes, in the 27th, Kiev took the lead with Vukojevic. Ten minutes later Quaresma scored for Beşiktaş. In the 43rd minute, Eremenko's attempt was turned into a corner shot by goalie Hakan and the first half closed with at a 1-1 draw.
The Ukrainian team started off fast in the second half, and Shevchenko slinked passed the defense like a snake in the 51st minute, bringing Dinamo Kiev up again by 2-1. Yussuf brought the score up to 3-1 in the 58th minute, officially killing all hope for the hosts. To top it all off, in the 90th minute, Hakan Arıkan brought Gusev down and a penalty shot was granted. Gusev scored, bringing the final score to 4-1.
For the first time last night the tribunes called for technical director Schuster to resign.