The eagles take flight with the young… 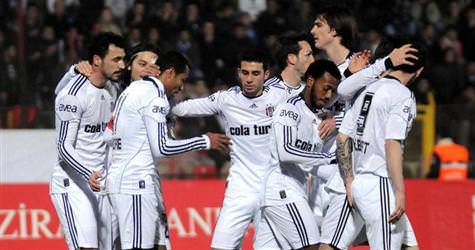 Winning the first leg by 5-0, Beşiktaş was already well on their way towards securing a spot in the semifinals. Therefore, Beşiktaş took their chances on playing a younger team last night and it was 16-year-old Muhammed that impressed…
Considering passing this round for Beşiktaş a guarantee, technical director Bernd Schuster decided to provide an opportunity for the team's younger players to come out on the field. Both Atınç (18) and Onur (21) were in the starting line-up and Muhammed (16), considered one of the team's up and coming stars, was brought in as a substitute in the 39th minute. In the second half of the game both Furkan (19) and Doğukan (19) also got the opportunity to perform.
Last night's goals were scored by Mert Nobre in the 11th minute. Roberto Jan Hilbert in the 75th minute and Hugo Miguel Pereira De Almeida secured the 3-0 victory in the final minute of the game.
Istanbul Büyükşehir Belediyespor has also qualified for the semifinals with last night's 0-0 draw against Kasimpaşa.
As of last night, the four qualifying teams for the 49th annual Ziraat Turkey Cup semifinals have been determined.
Having successfully eliminated their quarterfinal rivals, Beşiktaş, Gaziantepspor, Gençlerbirliği and Istanbul Büyükşehir Belediyespor will be facing off for the cup. Pairings, which were determined according to a previous drawing, are as follows: Beşiktaş-Gaziantepspor and Istanbul Büyükşehir Belediyespor-Gençlerbirliği.
The semifinals will be a double match elimination round. The first leg games will be played in Istanbul, while the return legs will be played in Ankara and Gaziantep. The dates of the matches are yet to be determined, however the victors will go on to play a final match in Kayseri's Kadir Has Stadium to determine the cup-holder.