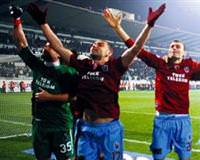 The Beşiktaş Trabzonspor rendezvous was especially exciting in its final half hour. Hosts Beşiktaş took the lead with Bobo when their rivals dropped down to ten, Ceyhun evened out the score then Burak came in to secure the win in the 88th minute…

The wind overpowered İnönü last night, resulting in a brilliant game with all that anyone could ask for included… Last night's game was a breaking point of sorts for league leaders Trabzonspor. After losing six critical points on their home field, last night's game against Beşiktaş meant three points or else for the team which shared the top spot with Fenerbahçe last week.
Beşiktaş came out in the first half of the game, whereas the second half turned into a tactical battle. When Beşiktaş went down to ten, they surrendered. But when Trabzonspor lost a player to a red card they continued the fight and won.
Şenol Güneş taught Schuster a lesson last night. He made a number of moves so critical that they resulted in turning the game around to Trabzonspor's advantage. Placing Piotr Brozek to the right and Umut to the left, Şenol brought Ceyhun in and Jaja out. Burak was brought up front and Beşiktaş was unable to respond. With Sivok's betrayal no one missed Ferrari. And… as for Guti, he kept hitting his passes straight into the caravan… Not only was there not a single player who stood out, there was also no system in place by last night's hosts. Trabzonspor managed to acquire some very important three points last night.
As for the game, a nice pass from Simao in the 31st minute made its way to Bobo, who in turn didn't make it into the post. In the 35th minute Trabzonspor embarked on their most dangerous attack of the first half. Serkan's shot ended up with Piotr Brozek, who went on to strike well however Rüştü made an incredible save. Beşiktaş continued to press for the first 45 minutes of the game, while Trabzonspor remained on the inside. In the 44th minute, Serkan was thrown out of the game, which appeared to finish Trabzonspor off psychologically.
Nobre came into the game in the second half. In other words at this point, Beşiktaş was now focusing entirely on the offensive. However, the first dangerous position to transpire in the second half came from Trabzonspor. In the 55th minute, Umut took action in the right wing, his strike made it past Rüştü, but due to its lack of speed, Ekrem managed to cool down the shot. In the 67th minute Hilbert centered the ball and since Trabzonspor had already forgotten about Bobo, he managed to make it through and scored a long missed goal with a header: 1-0. However, this joy for hosts Beşiktaş did not last long as just one minute later, Ceyhun also scored a header bringing the score to a draw: 1-1. At this point, excitement reached a peak in Istanbul's İnönü.
In the 70th minute, Sivok followed Serkan's example of throwing in the towel with a second yellow card, bringing both teams down to ten players each. In the 74th minute, a truly amazing position emerged. Burak came face to face against Rüştü. The young footballer broke free from the veteran goalkeeper and ended up m the ground. As referee Tolga Özkalfa called for the game to continue, Trabzonspor fans were enraged. In the 85th minute, Almeida's header was halted by the very successful Trabzonspor goalie Onur. In the 88th minute, Trabzonspor came back for an attack with Burak Yılmaz whose strike went straight past three Beşiktaş players to score: 1-2.
Trabzonspor celebrated their last minute win with their fans that had come out to Istanbul for support. Taking the leadership position once again, Trabzonspor may have to make room to share the top spot with Fenerbahçe depending on tonight's outcome.