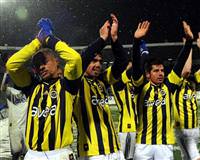 Fenerbahçe managed to beat Gençlerbirliği by 4-2 in Nakara last night, thereby reclaiming their spot at the top of the league standings.

While the first half of the game ended with a 2-2 draw, the second half was played under falling snow. The goals to carry Fenerbahçe to the peak were scored by Lugano, Alex, Niang and Santos. With last night's win, Fenerbahçe has brought their winning streak up to eight games in a row and has claimed the leadership position over Trabzonspor.
Fenerbahçe's technical director Aykut Kocaman started off by pressuring Trabzon's defense to seek out an opening. They were rewarded for these tactics in the 14th minute with a header by Lugano: 0-1. The home team began to exert more effort into the game at this stage and in the 18th minute Oktay's strike hit the goalpost before heading out

In the 22nd minute, Serdar brought Niang down securing a penalty shot for Alex, who easily scored: 0-2. Just as it appeared everything was going in Fenerbahçe's favor, the changing face of football reared its ugly head. Two unexpected goals by Orhan in the 25th and Hurşut in the 45th minute, brought the score up to 2-2 by the end of the first half.

Recovering efficiently from the shocking wave of goals from their opponents, Fenerbahçe continued to try their goalpost on for size. In the 63rd minute, a brilliant pass by Alex made its way to Niang who brought the score up again to 2-3. In the 68th minute, Santos took the stage, after a series of expert moves and a give and take with Emre, to go on to score the game's final goal. With the score at 2-4, Fenerbahçe finally felt like they could relax as they may have finally broken their capital jinx with a successful victory in Ankara.

Meanwhile, Fenerbahçe's derby date against Galatasaray has been released. On Friday, March 18th, Galatasaray will host Fenerbahçe at the new Turk Telekom Arena for a derby to kick off at 21:00.