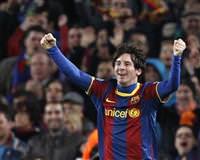 The brilliance of Lionel Messi crushed Arsenal's Champions League dreams for the second season in a row when the World Player of the Year netted twice to propel Barcelona into the quarter-finals Tuesday.

A tense last-16 second leg at the Nou Camp, which the La Liga club completely dominated, was marred for Arsenal by the controversial dismissal of striker Robin van Persie 11 minutes into the second half.

A Sergio Busquets own goal to level the scores at 1-1 would have put the visitors through but a fine strike from Xavi and Messi's penalty gave the 2009 winners a 3-1 victory and a 4-3 aggregate success that sent them into the last eight for a fourth successive season.

Arsenal were furious with the referee over the sending-off but they failed to muster a single shot on goal in the entire game while Barca managed 19. The La Liga leaders had almost 70 percent of the possession at a packed and boisterous Nou Camp stadium and completed 738 passes to Arsenal's 199.

"We played a fantastic match against 11 and against 10," Barca coach Pep Guardiola told reporters. "We did not allow them to make more than three consecutive passes."

Arsenal were chasing the ball from the kickoff and were rocked when they were forced to replace goalkeeper Wojciech Szczesny with Manuel Almunia in the 19th minute after the Pole dislocated a finger when dealing with a Daniel Alves free kick.

As Barca pressed for a goal, Adriano Correia raced in from the left wing in the 36th minute and struck a fierce angled shot against the post. Messi twisted and turned into space in the penalty area moments later but shot straight at Almunia.

The Argentina forward, who netted all four goals in a 4-1 win over Arsenal at the Nou Camp in last season's quarter-finals, put Barca ahead when he dashed on to Andres Iniesta's dinked pass, lifted the ball over the keeper with an audacious flick and volleyed into the empty net.

After Busquets's error from a Samir Nasri corner, Xavi rifled home from close range in the 69th minute and Messi claimed his second in the 71st following Laurent Koscielny's foul on Pedro.

Substitute Nicklas Bendtner had a chance to score in the dying minutes but he was denied by a brilliant covering tackle from midfielder Javier Masherano before Barca ran down the clock to complete a deserved victory.

"This was footballing justice. We were very superior both here and there (in the first leg)," Xavi told reporters.

"We had an infinite number of chances to kill the game off but it was Leo who again made the difference."

Messi's goals were his seventh and eighth in the competition this season, putting him one ahead of Chelsea's Nicolas Anelka, Inter Milan's Samuel Eto'o and Bayern Munich's Mario Gomez at the top of the scoring charts.

Arsenal manager Arsene Wenger was furious about the Van Persie sending-off, which he felt changed the game at a time his side were coming back into contention.

"At the moment he made his decision it was a very promising game, very interesting," the Frenchman told reporters.

"If you have played football at a certain level you cannot understand this decision. It's impossible.

Barca, who also beat Arsenal in the 2006 final, will go into the March 18 draw for the last eight when they could be pitted against Real Madrid if their arch-rivals get past Olympique Lyon next week.