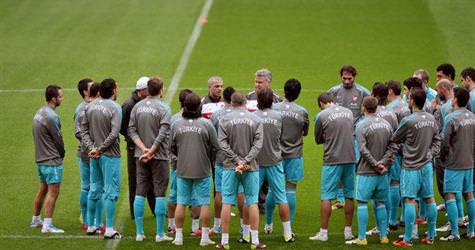 Emre, Hamit and Servet are the only footballers to play in each of the past four games in the Euro 2012 eliminations. Overall, Hiddink put 23 different players on the field.

It seems Turkey's National Team Director Guus Hiddink has only three players he has not turned back from in the four games played thus far for the 2012 European Championship elimination round. Hamit Altıntop, Emre Belözoğlu and Servet Çetin... Having spent the entire 90 minutes plus on the field in the elimination round games against Kazakhstan, Belgium, Germany and Azerbaijan, the Hamit, Emre and Servet threesome appear to be Hiddink's favorites. One of the three musketeers appears to have fallen by the wayside, however. Due to an injury, Emre has not been added to the line-up for tomorrow night's game against Austria. Hamit and Servet will be able to don uniforms, should the technical committee assign them to the starting line-up. Amongst other star players, Volkan Demirel, Arda Turan and Gökhan Gönül missed some of the first games played for Euro 2012 due to injuries. While Volkan handed over the goal post to Onur for the games played against Kazakhstan and Belgium, Arda was unable to play in either games against Germany and Azerbaijan.
COLIN CAME OUT FOR JUST ONE MINUTE
While Gökhan didn't play in the Kazakhstan match; he was only played for 17 minutes in the game against Belgium. Tuncay Şanlı didn't even play a full 90 minutes in the four games played combined, while Colin Kazım only had the opportunity to wear a uniform on the field for one single minute. Overall, Hiddink has played a total of 23 players in elimination round games thus far.