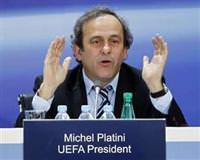 UEFA president Michel Platini fears that international soccer is losing prestige and a look at Tuesday's uninspiring programme of Euro 2012 qualifiers appears to justify his concern.

Saturday's 13 games produced three goalless draws and four one-goal games, Germany and England barely broke sweat in overcoming Kazakhstan and Wales respectively and none of Tuesday's 10 matches could be described as mouth-watering.

Spain and Netherlands are the only two of the big guns in action but, sadly, they will not be meeting each other.

The Dutch, runaway leaders in Group E, host the Hungarian team they beat 4-0 away on Friday and whose only real ambitions at the Amsterdam Arena will be to keep the score more respectable.

Spain's visit to Lithuania could optimistically be described as tricky, with the team from the Baltic state having provided one of the few qualifying upsets by winning 1-0 away to Czech Republic.

However, their record of two goals scored in three Group I outings does not suggest they are a huge threat to Vicente del Bosque's team.

Apart from that, there are several fixtures between evenly-matched middle-ranking teams battling for a second-place finish such as Turkey v Austria in Group A, Estonia v Serbia and Northern Ireland v Slovenia in Group C and Sweden v Moldova in Group E.

There are also three matches which will inevitably see the visitors defending en masse in the unlikely hope that they can sneak a point -- Belgium v Azerbaijan, Romania v Luxembourg and Czech Republic v Liechtenstein.

None of this is more than a minor distraction from the club season where domestic leagues are reaching their climax and the Champions League is at the quarter-final stages.

Platini was re-elected for another four years as UEFA president last Tuesday and said his priority was to help international football regain its prestige.

The Frenchman, however, would not contemplate changes in the qualifying format, saying fans all over the region had the right to see the top teams on their doorstep.

So far, the Euro 2012 qualifying competition has been little more than a procession of easy wins for the big sides.

Germany already find themselves eight points clear in Group A, with five wins out of five, while Italy lead Group C by six points, France top Group D by four points and the Dutch and Spanish enjoy six-point leads at the top of Group E and I respectively.

Tiny Montenegro have been the outstanding revelation, beating Switzerland and drawing away to England in Group G where they share the lead with Fabio Capello's team with 10 points.

Georgia have also surpassed expectations, a 1-0 win over Croatia on Saturday taking them third in Group F, two points behind leaders Greece, and with a visit to Israel on Tuesday.

Group B is also evenly poised with Slovakia, Russia and Ireland level at the top on 10 points and Armenia, who held the Russians 0-0 at home in Saturday's most surprising result, two points behind.

Tuesday's real drama may come off the field where Bosnia, who beat Romania 2-1 on Saturday in Group D, have their final chance to avoid being kicked out of the competition.

The Bosnian federation (NFSBiH) is scheduled to hold a Congress where it will decide whether to change its three-man rotating presidential system to bring it in line with UEFA and FIFA statutes.

If the federation fails to introduce a single-presidential system -- and recent comments by leading officials suggest the outcome is highly unpredictable -- it will automatically be suspended on Friday.