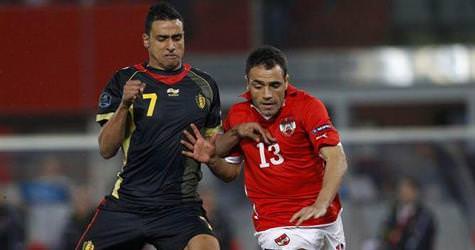 Austria defender Ekrem Dağ has admitted to mixed feelings at facing Turkey, the country of his birth, in their Euro 2012 qualifier on Tuesday.

"It's an honour to play for the Austria national team. But I haven't forgotten that I was born in Turkey," he told the Austrian federation's website (www.oefb.at) on Monday.
The 30-year-old also sat on the fence when it came to declaring if he would celebrate scoring a goal in the match in Turkey.
"We'll see when the time comes. This is a special match for me," he said.
Dağ was born in Turkey, moved to Austria as an eight-year-old and began his professional career with Sturm Graz, although he now plays in Turkey with Beşiktaş.
He was first called up by Austria in 2009 having turned down an offer to play for Turkey.
Dağ is one of three players in the Austrian squad with Turkish roots alongside Yasin Pehlivan and Umit Korkmaz.
Austria are third in Group A with seven points from four games, one ahead of Turkey.
There is media speculation about the future of coach Didi Constantini following a dismal performance in their 2-0 home defeat by Belgium on Friday.