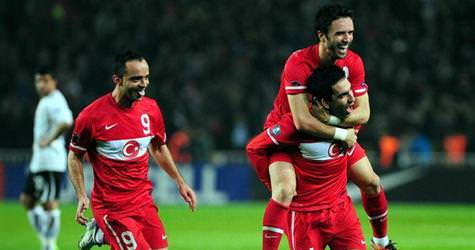 Turkey, rejuvenated with fresh blood after two poor results, revived their Euro 2012 qualifying campaign with a 2-0 win over Austria on Tuesday with goals in each half from Arda Turan and Gokhan Gonul.

Goalkeeper Volkan Demirel also made a penalty save as Turkey moved to nine points, six behind Group A leaders Germany and one point behind second-placed Belgium.
Arda gave Guus Hiddink's side the lead after 28 minutes when he positioned himself smartly to receive a throw-in, beat two defenders then slotted the ball into the far corner.
Gokhan made it 2-0 after 78 minutes before Austria wasted the chance to set up a nervy finale when Stefan Maierhofer's 84th minute penalty was saved after it had been awarded for a foul by Hakan Balta on Erwin Hoffer.
Turkey desperately needed a win after losing their last two qualifying matches last October including a humiliating defeat to Azerbaijan, prompting questions over Hiddink's selections.
The veteran coach has since brought skilled newcomers into the team such as German-born Mehmet Ekici and Serdar Kesimal, and has said he is still scouting for new talent.
"We said before the game we needed a win and so there was a lot of pressure on us... It was important today to get back in the driving seat but we are now in the driving seat and hold our own fate in our hands," Dutchman Hiddink said.
"I am happy with the win but I am also critical about some aspects of our performance. We played well in the first half and I was waiting for the second goal but then in the second half we dropped too much back into the midfield." Austria are now in fourth place in the group on seven points having lost to Belgium last Saturday.
"The group was always going to be tough. We are not as big a nation as Germany or Turkey, but we are always still good for a surprise," said coach Dietmar Constantini.