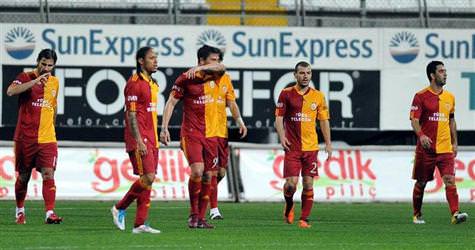 Galatasaray’s footballers have practically become human mills as since the start of the season they have ushered in the likes of Rijkaard, Adnan Sezgin, Hagi, which club president Adnan Polat would then grind, leaving no one left to be depleted.

While Galatasaray continues to experience the worst series in the club's history in recent years, they had hoped to begin on an incline with the team's new technical director Bülent Ünder against Antalyaspor last night. In the 31st minute, Antalyaspor caught a break with Erkan who found himself in front of the ball which came out of the confusion in the penalty field. Erkan struck hard and brought Antalyaspor up by 1-0. Just six minutes later, former Galatasaray player Necati was face to face with the goalkeeper, however when he shot the ball over Ufuk, he missed a chance to bring Antalyaspor's score up to 2-0 against Galatasaray. While the first half of the game to a close with a single goal scored, the second half started fast on behalf of Antalyaspor.
In the 59th minute, Necati took advantage of a reverse pass by Serkan and came face to face with goalkeeper Ufuk once again. This time however, with a beautiful shot, the former Galatasaray footballer managed to bring last night's hosts up by two.
It was the 60th minute however that Galatasaray was ultimately devoured! When Ali Zitouni entered into the penalty field with a through pass from Necati, Ufuk brought him down, resulting in the referee granting Antalyaspor a penalty shot. Necati turned that shot into a score, bringing Antalyaspor up by 3-0. Last night's loss may have been a sign that Galatasaray might have to struggle in the next couple of weeks to ensure they aren't relegated from the league.
NUMERICAL DISASTER
For the first time in Galatasaray's league history, the team has lost five away games in a row in a single season.
Out of 27 games played this season, Galatasaray has won ten, drawn three times and has suffered 14 defeats, thereby securing the record for most losses in a single season amongst the teams considered to be the 'top three' (Beşiktaş, Fenerbahçe and Galatasaray).
Galatasaray suffered 37 goals scored in their goalposts out of 27 games, which for the club marks the highest number of scores recorded against the team in their history in the league.