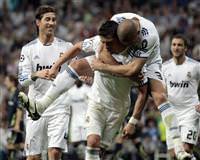 The all-English clash at Stamford Bridge is a repeat of the 2008 final won by United on penalties and just two of their last 11 competitive meetings have been decided by more than one goal.

Having seen Tottenham Hotspur crushed 4-0 at Real Madrid on Tuesday it looks likely the winner of the Chelsea-United tie will be the only remaining English side in the competition with the final due to be held at Wembley on May 28.

United, leading the Premier League and into the semi-finals of the FA Cup, are still dreaming of repeating their 1999 treble but the Champions League remains the only realistic hope of silverware for last year's domestic double winners Chelsea.

Schalke 04's stunning 5-2 victory at holders Inter Milan on Tuesday will have given encouragement to Shakhtar's players and fans as they prepare to face the favourites at the Nou Camp.

The Brazilian-packed Ukraine side are in the last eight for the first time and although they must perform at their peak they can draw inspiration from their group stage win in Barcelona in December 2008, the season the Spaniards went on to take the title.