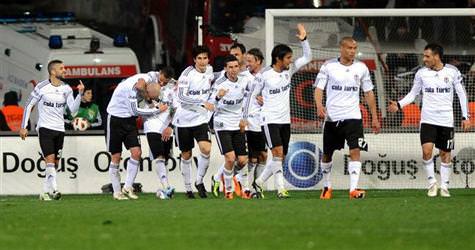 Tonight Beşiktaş hosts Gaziantepspor for a 20:00 kick-off for the first leg of the semifinals for the Turkey Ziraat Cup. No fans will be in the stands at Inonu tonight.

Having thrown in the towel in the Super League, tonight Beşiktaş faces Gaziantepspor for a critical test in the first leg of the Ziraat Turkey Cup semifinals.
In order to participate in European cups next season, Beşiktaş must bring the Turkey Cup home to their museum, however due to a penalization; they will be playing tonight's game without spectators.
Another matter of distress for Beşiktaş prior to the difficult game tonight, is the absences in the team's defense line…
Sivok will not be playing tonight due to a red card penalty from the latest league game played against Sivasspor, while Ferrari was recently injured in a training session and will also be sitting out the game, Technical Director Tayfur Havutçu will be giving young stopper Atınç a chance in Ferrari's absence. In addition, injured players Ekrem Dağ, Ersan Gülüm and Onur Bayramoğlu will be supporting their team from the stands.

Beşiktaş's averages in recent games played without spectators are as follows: out of 12 games played,eight were wins, two were draws and two were losses. Beşiktaş has scored a total of 23 goals in the 12 games played, eight of which were league games and four which were for the Turkey Cup, whereas they have been scored against a total of 12 times.