One’s after the prestige, the other the leader’s seat 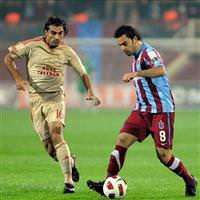 Sunday night Istanbul hosts a ‘silent’ face-off between Galatasaray and Trabzonspor for the 28th week of the Spor Toto Super League.

Due to a penalty incurred during the derby game against Fenerbahçe, Galatasaray will not be allowed to have spectators in the stands during tomorrow night's game against Trabzonspor.
Suffering their worst days ever in league history, Galatasaray is currently in 13th place in the league, while Trabzonspor started off the 28th week as leaders. Sunday night's match starts at 19:00 and will be played at the Ali Sami Yen Sports Complex Türk Telekom Arena and refereed by Bünyamin Gezer.
GALATASARAY IN PURSUIT OF PRESTIGE
Galatasaray's last win was on February 19th against Bucaspor, and therefore they are seeking prestige from a win tonight. Playing under their third technical director this season alone, with 33 points, Galatasaray holds 13th place in the league standings. Out of the past 27 weeks played, Galatasaray has acquired 10 wins, three draws and 14 losses. They have scored 29 goals and been scored against 37 times. With an average of minus eight, Galatasaray lost their last game against Medical Park Antalyaspor by 3-0.
Galatasaray will be missing Milan Baros due to a red card penalty. On the line with a yellow card, Serkan Kurtuluş will also not be playing tomorrow night along with injured players Lorik Cana and Hakan Kadir Balta. Stancu is still slightly injured and Captain Arda Turan was unable to complete the training session yesterday due to pain, therefore whether they will play Sunday night has yet to be determined.
TRABZONSPOR INTENDS TO STAY WHERE THEY ARE
By beating Konyaspor by 1-0 last week coinciding with Fenerbahce's goalless draw against Bursaspor, Trabzonspor has reclaimed their position in the league leadership seat and has every intention to continue to carry this title after Sunday night's game against Trabzonspor.
The last time Trabzonspor won against Galatasaray in Istanbul was April 10th, 2005, and they went on to lose the next five away games. This time, on the exact same date as those many years ago, Trabzonspor want to win and to continue wining for the next six weeks.
In the past 27 weeks of the Spor Toto Super League, Trabzonspor has acquired 63 points, just two points ahead of Fenerbahçe who faces off against Eskişehirspor this week. Going into the 28th week as leader, Trabzonspor sports 19 wins, six draws and just two losses. Having scored a total of 55 goals, Trabzonspor has only seen 21 scored in their own goalpost.
Having won their last four games, our Black Sea representatives, have won ten out of 13 away games played, have drawn twice and lost just one game, making them the team to have acquired the most points on rivals' fields.