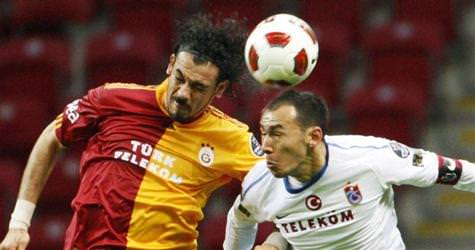 Trabzonspor overpowered hosts Galatasaray last night, reclaiming the leadership spot from Fenerbahçe which had beaten Eskişehirspor the day prior. Burak Yilmaz’s goal broke the silence with the winning goal. The wind picked up for Trabzonspor after Kazım was thrown out with a red card and it was only minutes later, in the 81st to be exact that Burak brought Galatasaray down to the ground.

Galatasaray went out to win last night's game as assurance they wouldn't face relegation, while for Trabzonspor last night's trying game in Istanbul held much significance for retaining their leadership standing in the league. Last night's 90 minutes of spectator-free football provided a number of goal positions, contrary to expectations. While the opportunities that popped up for Galatasaray took prominence, Trabzonspor's timid game also did not go by unnoticed. In just the 1st minute, Serkan's mistaken header was met by a strong strike from Yekta that Trabzonspor's goalie Tolga Zengin managed to save. Suffering an injury from a hit by Glowacki, with this position Yekta officially closed out the season. In the 4th minute, Selçuk's powerful strike from outside of the penalty field was sent to a corner shot by Galatasaray's goalkeeper Zapata. In the 16th minute, Neill's pass from the right wing found its way to Arda who head butted it in front of the goalpost, which was unable to make it past Trabzonspor goalkeeper Tolga Zengin. In the 20th minute, Arda tried his luck once again, this time from outside of the penalty field, however once again Tolga did not allow the shot to turn into a score.
In the 43rd minute, the visiting team finally took a chance with Burak, who struck hard from outside of the penalty field however the ball was returned by Zapata. Trabzonspor did start out the second half of the game fast. In the 47th minute, Burak entered into the penalty field, and while trying to play the ball sideways and save himself from Zapata, he instead found himself on the ground. When referee Gezer saw that Zapata touched the ball first, he made a call 'to continue.' In the 54th, minute a sweet pass from Neill in the right, was headed by Arda, however Tolga managed to save it right at the goalpost. The moment that determined the game's outcome came in the 75th minute with Kazım, who received an immediate red card for stepping on Serkan's foot.

PINO MISSED AND BURAK DID NOT FORGIVE
In the 81st minute, Pino tried a shot from a two on three attack, however the ball didn't make it past Tolga. In the same minute, Jaja sent the rebound in a brilliant pass to Burak who sent it into the goalpost, bringing the score to 0-1. Trabzonspor thereby secured last night's win with a single goal, the seventh win of which the team has racked up with a single goal difference while also marking the fifth away game the leaders won with goals scored in the final ten minutes.

FIFTEEN POINTS FROM THE BIG GUNS
In this season's race for the championship, Trabzonspor proved themselves worthy contenders with wins against all of the top teams in the league. By beating Galatasaray a second time this season, Trabzonspor broke a record. Having acquired successful victories against Galatasaray in Avni Aker in the first half of the season, Trabzonspor also managed to beat Beşiktaş and Fenerbahçe, and then went on to win against Beşiktaş in Istanbul and now Galatasaray, securing five wins from the league's teams considered to be 'the big guns'.