Five goals will still not be enough for Spurs 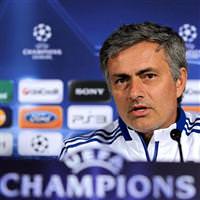 Even if Tottenham Hotspur score five goals, that will not be enough for them to knock out Real Madrid and reach the semi-finals of the Champions League, Real manager Jose Mourinho said on Tuesday.

Mourinho, speaking at a news conference at White Hart Lane before Real protect their 4-0 first leg advantage on Wednesday, said his team were coming to "finish the job" and would be looking to win rather than defend their comfortable lead.

No team has ever overturned a 4-0 first leg deficit to advance in any European competition and Mourinho is not about to let his side become the first to suffer such an unlikely fate.

"We have to respect Tottenham and we have to respect football," Mourinho told a packed suite at the stadium, "because football sometimes can betray you and we cannot give them the chance of doing that.

"That's why we are coming here to play seriously, especially for me and people like Xabi (Alonso) who know the mentality of English stadiums and English supporters, English teams. They will try everything.

"Harry Redknapp (Tottenham's manager) is a good friend of mine and if I put myself in Harry's position, imagine we had lost 4-0 here and we go to Madrid for the second leg, I wouldn't throw in the towel. I would do everything with my players to try and get a miracle.

"The only thing I say is we have to respect our opponents.

"We have to play seriously, but at the same time I don't think five goals will be enough for Tottenham to beat us, because I think we are coming here to score goals."

Real are bidding to lift the European Cup for a record-extending 10th time but Mourinho refused to talk about the likely prospect of facing Barcelona in the semi-final, and instead concentrated on Wednesday's game.

"Playing Barcelona means nothing to me now, it is all about tomorrow's game and I will pick my best side for the match.

"I think that some of the players find themselves in a slightly complicated, tough situation -- a delicate situation.

"I think we have to respect the opponent, we know there is quite a difference in the scoreline, but we still have a job to finish tomorrow night."