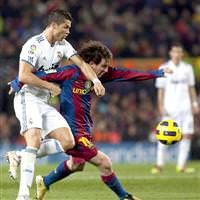 Soccer fans will have a unique chance to see Real Madrid and Barcelona -- two of the world's best teams and the two richest clubs -- lock horns four times in 18 days starting with Saturday's La Liga match at the Bernabeu.

The arch Spanish rivals also meet in the final of the King's Cup on April 20 and home and away in the European Champions League on April 27 (Bernabeu) and May 3 (Nou Camp).

Following is a translation of a selection of Spanish words and phrases which help explain the historical rivalry between Real Madrid and Barcelona in the matches known as the "clasicos".

Barcelona and their fans are known as "Cules" which means "arses" in Catalan.

At one of the club's first stadiums in Calle Industria fans used to sit on the outer wall watching matches, and all that passers-by could see when they looked up from the street was a row of backsides, which promoted the nickname.

Real Madrid are known as the Meringues because their distinctive all white kit (shirts, shorts and socks) resembled the famous pudding made from egg whites and sugar.

In recent times, the Madrid-based sports press have accused Barcelona of falling victim to "Canguelo", which literally means being scared stiff that Real Madrid would come up behind them to steal the league title.

In 2007, Fabio Capello's Madrid famously overhauled Frank Rijkaard's Barca side to snatch the title on the final day of the season, prompting accusations Barca had bottled it.

Although Madrid won the title again in 2008, they have mostly trailed Pep Guardiola's team hoping for slip-ups since then, but always displaying an impressive "never-say-die" approach which regularly seems to unsettle their rivals.

Last weekend, Jose Mourinho's team were comfortable 3-0 winners at Athletic Bilbao, while a nervous-looking Barca had to come from behind to beat basement club Almeria 3-1 at home.

A victory for Real in Saturday's "clasico" would leave them five points behind with six games left and the ghost of Capello's 2007 fightback could lead to more "Canguelo" in the Catalan capital.

Barca's 5-0 hammering of Real at the Nou Camp in November had home players and fans waving their hands in the air with their fingers spread in celebration of the five goals -- la manita, or "little hand".

In the buildup to Saturday's game, an advert to promote a private health insurance company on Barcelona city buses caused a stir in Madrid as it showed five Barca players holding out their hands in a similar manner.

The club moved quickly to distance themselves from the advert and accusations that they were being disrespectful to their rivals.

Barca's 5-0 win means Real Madrid have to better that result at the Bernabeu if they are to have head-to-head advantage should the pair finish level on points at the end of the season.

Over the years, conspiracy theories have abounded about impartial refereeing in favour of either team.

Accusations of favouritism shown towards Real by referees during the dictatorship of Francisco Franco have given way recently to Barca being accused of having a helping hand from match officials and the authorities.

The theory that Barca backed the re-election of Angel Maria Villar to the presidency of the Spanish soccer federation (RFEF), while Real supported a rival candidate, has given rise to the term "Villarato" which is used every time Madrid fans think Barca have had some kind of favourable treatment.

Jose Mourinho has stoked the fires of the debate this season, complaining of favouritism towards Barca in the calendar, the timing of matches and in the punishments handed out to himself and his team.

Barcelona's slogan "more than a club" helps explain why the "clasico" is more than just a football match.

Barca is seen as a symbol of Catalan nationalism and the region's continual struggle for recognition against the perceived centralising force of the Spanish government in Madrid, embodied in Real.

Barca fans wave the yellow and red-striped Catalan flags and hold up banners at the Nou Camp proclaiming in English "Catalonia is not Spain".