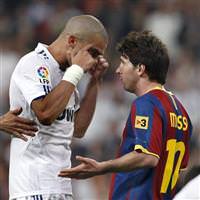 La Liga leaders Barcelona and closest rivals Real Madrid, who meet in the final of the King's Cup on Wednesday, have extended their domination over Spanish soccer in recent seasons.

The world's two richest clubs, based on Deloitte's revenue rankings, will also clash in their two-legged Champions League semi-final on April 27 and May 3, to complete an unprecedented four meetings in three competitions in 18 days after Saturday's 1-1 La Liga draw at the Bernabeu.

Following is a Q&A on some of the reasons for their domination of domestic football, which analysts have said also give them an edge over European rivals:

Actually how dominant are they in Spain?

Barca's second consecutive La Liga title last season was secured with a record points total of 99, smashing the previous high of 92 set by Real in 1997 when there were 22 teams in the top flight instead of the current 20.

Real, who finished second, set a club record points total of 96, and scored 102 goals, four more than Barca. They finished 25 points ahead of third-placed Valencia, who were the last club other than Barca or Real to win the title, back in 2004.

This season, Barca lead the way on 85 points with six games left and 18 points still to play for, Real are second on 77 and Valencia have 63 in third, six ahead of Villarreal.

What is the main reason for their hegemony?

Revenue from audiovisual rights. Barca and Real suck in about half the total income from television deals for Spanish soccer of around 600 million euros (525 million pounds), which is topped up by TV cash from European competition.

Barca earned almost 180 million euros from audiovisual contracts in the 2009/10 season, with Real reaping just under 160 million, according to the latest Deloitte Football Money League published in February.

A study published last year by Sport+Markt, a consulting firm, showed the pair earned almost 19 times more from TV than the smallest clubs in Spain's top division, by far the biggest gap in the major European leagues.

The richest clubs in the English Premier League, which generates just over a billion euros a year in broadcast revenue, earned about 1.7 times more than their smaller rivals.

What does it mean in practice?

Combined with revenue from other sources, such as commercial and matchday income, Barca and Real's spending power means they can afford the huge transfer fees and wages commanded by the world's top players.

Under President Florentino Perez, Real have splurged hundreds of millions of euros over the past two seasons, including a record 94 million on Portuguese forward Cristiano Ronaldo and 65 million on Brazil playmaker Kaka.

Barca's total labour costs in the 2008/09 season, including amortisation of players, were 255.2 million euros, compared with 249.5 million for Real, according to a study by a University of Barcelona accounting professor published this week.

By comparison, Manchester United's expenditure on total labour costs was 188.7 million, Bayern Munich's was 172.4 million and Arsenal's was 150.1 million, the study showed.

Is the Spanish system of negotiating TV deals different to rival European leagues?

Most of Europe's top leagues bundle their audiovisual rights together and negotiate collectively with media companies, while in Spain clubs have always thrashed out deals individually.

Starved of a decent share of TV income, many of Barca and Real's domestic rivals have tumbled into the red and even administration. They have no real hope of winning the league.

Is the situation likely to change anytime soon?

Probably not, according to analysts.

An agreement brokered by Barca and Real in November with 11 other top-flight clubs on sharing some of the TV cash from 2015 is likely to cement their advantage while helping the others only marginally.

As Deloitte noted in February, Barca and Real have sought to at least protect current revenue levels, which provide a key advantage over their European peers.

It will also help them comply with UEFA's new "Financial Fair Play" rules, which are designed to stop clubs spending more than they earn, while some of their European rivals could find themselves in trouble.

Does it really matter that they are so dominant?

Many Spanish soccer fans support Barca or Real as well as their local team so there will always be a large pool of TV viewers for their matches, which typically attract an audience of millions around the world.

However, a league of 20 in which only two teams battle for the title each season will be harder to market to media companies and over the longer term Real and Barca could lose out along with their Spanish peers.