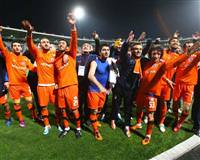 Last night Istanbul Büyükşehir Belediyespor beat Gençlerbirliği by 3-0 in an away game, securing their spot in the finals against Beşiktaş for the Ziraat Turkey Cup.

The first leg semifinal ended in a 1-1 draw in Istanbul. With last night's win with goals by İbrahim Akın, who scored twice and Tum, whose goal secured the victory.
Istanbul Büyükşehir Belediyespor will be facing off against Beşiktaş on May 11th in Kayseri to try and win the club's first ever cup championship.
Istanbul Büyükşehir Belediyespor took an early lead, with a shot by İbrahim Akın which made it past Gençlerbirliği's goalie Özkan bringing the score to 0-1. The first goal's hero İbrahim Akın went on to take the stage once again in the 22nd minute with a free kick: 0-2. In the 25th minute, Homen's center was met by Tum in the penalty field, who sent it into the goalpost, scoring the team's third and final goal: 0-3.