Trabzonspor trips up with a tie, and Fenerbahçe attempts to take over 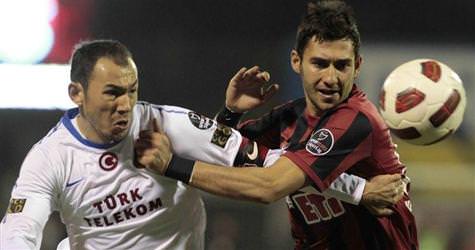 Fenerbahçe faces off against Bucaspor tomorrow night and will be seeking to reclaim the leadership position of the Spor Toto Super League, while Trabzonspor reels from last night’s 0-0 draw against Eskişehirspor.

With last night's draw for Trabzonspor, which had started off the week as league leaders, the two point loss offers a chance for Fenerbahçe to reclaim the leadership position with an average above Trabzonspor as they face off against rivals that are struggling against relegation from the league, with just four weeks left.
In away games played this season, with the exception of the 16th week game against Ankaragücü in which they lost 2-1, Fenerbahçe has won all six games played on rivals' fields.
NO NİANG
From Fenerbahçe, Niang will not be playing in tomorrow's game against Bucaspor, Semih is expected to play in the striker's place.
Not only is Niang injured but he also received a yellow card last week against Gaziantepspor and therefore trainer Aykut Kocaman will not be brining him out on the field. Also injured following last week's game, Selçuk and Dia are not expected to play tonight.
Fenerbahce's probable starting lineup is as follows:
Volkan Demirel, Gökhan Gönül, Lugano, Yobo, Andre Santos, Mehmet Topuz, Emre, Cristian, Caner (Stoch), Alex and Semih.

Tomorrow's night's game kicks off at 19:00, will be played at the İzmir Atatürk Stadium and refereed by Bünyamin Gezer.

THREE PLAYERS ARE AT CARD LIMIT
Prior to tomorrow night's game against Bucaspor, three Fenerbahçe players have reached the yellow card limit.
With three cards each in the Spor Toto Super League, should Caner Erkin, Cristian Baroni and Emre Belözoğlu, receive cards tomorrow they will not be allowed to play against Istanbul Büyükşehir Belediyespor in the league's 31st week.